THE LEGEND OF OBAMA

"Probably the smartest guy ever to become president."
-Michael Beschloss 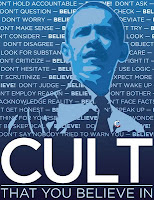 President Obama won election on a wave of anti-Republican sentiment and slogans. Most of the people polled and interviewed who voted for Barack Obama didn't know much about his positions or ideas, but loved what they thought he was, and what he was sold as. At least some thought he held the same positions as Senator McCain, and liked that, for example.

As a former CIA recruiter notes, president Obama was never properly vetted. The purpose of vetting is to screen out anything problematic and bring to the surface any important details of a candidate's background. Missing from Obama's background was most of what you'd really want to know in an applicant for a job, particularly the most powerful job on earth:

On the other hand, Barack Obama’s background remains nearly a blank slate. His school records, from kindergarten to law school, remain hidden. The story of his financial support is hidden — his private elementary and high school in Hawaii, his international travel, his graduate and undergraduate tuition and living expenses, and more. And these are just the beginning of the Barack Obama vetting failure.

So instead of a candidate which had certain policy positions and background we could vote for or against, we got a myth, a series of images and slogans designed to dazzle and baffle voters. And it worked.

But as Victor Davis Hanson writes, all the things said about Obama by his supporters were just myths. We were told over and over that Barack Obama is incredibly intelligent, yet:

In short, the myth of Obama’s brilliance was based on his teleprompted eloquence, the sort of fable that says we should listen to a clueless Sean Penn or Matt Damon on politics because they can sometimes act well. Read Plato’s Ion on the difference between gifted rhapsody and wisdom — and Socrates’ warning about easily conflating the two.

Or, as I said, he's a sophist, giving us tricky and carefully crafted speech in the place of eloquence and truth.

We were assured that Senator Obama was a "healer" who would bring the fighting politics to an end and create bipartisan consensus, but:

The truth? The Obamites — Jarrett, Axelrod, Emanuel, etc. — were hard-core partisan dividers, who had a history of demonizing enemies, suing to eliminate opponents, and leaking divorce records, in addition to the usual Chicago campaign protocols.

If one were to collate the Obama record on race (from Eric Holder’s “my people” and “cowards” to Sotomayor’s “wise Latina” and Van Jones’s racist rants), it is the most polarizing in a generation.

He's been more divisive than any president in my lifetime, not by holding positions some people hate but by deliberate rhetoric and action, supported by his workers and associates.

We were told that Obama was a reformer, who'd change the way things were done in Washington, a class warrior who'd fight against the cronies and entrenched power. Instead:

The more Obama badmouthed BP and Goldman Sachs, the more we knew he received record amounts of cash from both (were the bad “millionaires and billionaires” snickering that this was just part of the game?). He renounced liberal public financing of campaigns of over three decades duration, as only a liberal reformer might, and got away with it. Obama raised far more money than any candidate in history, and will go back to the same trough this time around. On a Monday the president will vilify Wall Street, on Tuesday host a $40,000-a-head dinner...

And finally we were told that Senator Obama was magnanimous, above the fray, and generous. Instead, he takes credit for what he hasn't done (and vigorously opposed) in Iraq, continues the very policies he claimed were evil in President Bush, and blames every woe on his predecessor, ATM machines, and even the internet.

How did what was superfluous, unconstitutional, and possibly illegal in 2008 become vital in 2011?

The man has the same tendency to shift blame and pretend he's the good guy as President Clinton without the charm and skill at lying.

And so we have a president who's nothing he was presented as, lacking any substance during his campaign, and an utter failure while in office, who now wants everyone to give him the same job again. But this time around instead of clever slogans and halo imagery, people know what he's like and what he can and cannot do.

Yet all those Democrats will vote for him again, anyway, because better him than any Republican.
Posted by Christopher R Taylor at 9:15 AM

Of course the Democrats are going to vote for him, but they aren't the ones who concern me. It's the independent voters who have decided the last few elections, and I think even as bad as things have gotten, Obama is still a pretty good sell to many of those voters, at least compared to most of the Republican candidates. He is going to run as a tax cutting, pro-education, moderate who rid the world of Bin Laden and Quadaffi and is ending our wars and bringing home the troops. That's not all true, of course, but it will play well to people who find him likeable, and polls indicate that while people disagree with his policies, most Americans who aren't hard-core conservatives tend to like Obama at a personal level.

Mitt or Newt would at least be able to debate him well, and are generally as skilled as Obama at public speaking. The problem being neither one of them are substantially or reliably more conservative than Obama.

I just can't stand mindless party loyalty. If, say, Huntsman had run against McCain, I'd have voted for him in 2008. That simply isn't possible for far too many voters, to consider voting for some party other than the one they usually vote for (or belong to). It just annoys the hell out of me.

I agree. I have crossed party lines in the voter booth many times and for various reasons, including because the Democrat was the better candidate.