"I suggest the author consider revising, and having some chapters from other characters' viewpoints. " 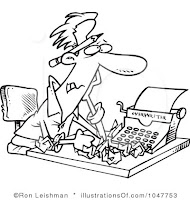 Both of my first two books are written in what literary experts call "first person narrative," that is, they are written as if someone is telling you a story that happened to them. The first was done deliberately in this manner because I was trying to copy the style and technique of Louis L'Amour, who often used first person in his stories. The second was done that way because it was the easiest way of explaining the tricks the thief used and his slang.

Some people really like first person, some people can't stand it. In one of the few responses I got from an agent, she noted that she really liked my writing and wanted to see more, but didn't like the "omniscient narrator" which was a bit mistaken because Stoce was hardly omniscient in the book. I have a review on Smashwords by a reader who is in this second category as well. She likes the book and the story, but spends several paragraphs complaining about the first person narrative structure.

Its always interesting to see people complain about that style, since its been used in some very famous, prominent, and respected books such as:
Authors such as William Faulkner, Frederik Pohl, Joseph Conrad, and Henry James all have used first person (Faulkner even used first person plural, with "we" in stead of "I" as did Isaac Asimov in his robot stories). This isn't a cheap device used by hack storytellers, but it appears to presently out of favor with publishers and at least some readers.

Those of you who don't like it, never fear, I'm using third person narrative in my next few books.  Third person still has an omniscient narrator, but some people seem to feel more comfortable with it being someone not in the story, for whatever reason.

Its always interesting to me what people find striking or memorable about a book. For me, Old Habits was memorable mostly due to the "thiefy" things Stoce does and the language I wove into it. I worked hard at creating a unique slang and various different voices for characters that don't exist in the real world without making it nearly incomprehensible like A Clockwork Orange.

In any case, if you've read Old Habits I would very much appreciate it if you would leave a review on Amazon particularly as that's the one that gets the most eyeballs. Even if you didn't care for the first person narrative!

If you'd like to read Old Habits, you can buy a copy at Lulu.com or download an e-book version at either Amazon or Smashwords.
Posted by Christopher R Taylor at 8:18 AM

Larry McMurtry has a book called 'Leaving Cheyenne' that tells the story of a 40-year-old love triangle between a rancher, a cowboy, and the woman they both love. The entire book is in first-person but it is split into three different time periods and each period is told from the perspective of a different central character.

I'm sure that has to be very challenging for a writer (McMurtry pulled it off well with excellent characters, but there is very little plot in the story), but it is such an interesting way to read a story, sort of circling around it from different perspectives... I wish more authors would take a stab at it.