"What’s the difference between Gaddafi killing his people and Assad killing his?"
The big billboard with George Bush and the words "Miss me yet?" really hit a chord with many people. Its not so much they long for Bush to be president again, its that the present administration is so hapless, destructive, and humiliating for the country that we want it gone that bad.

But these guys miss Bush a lot: 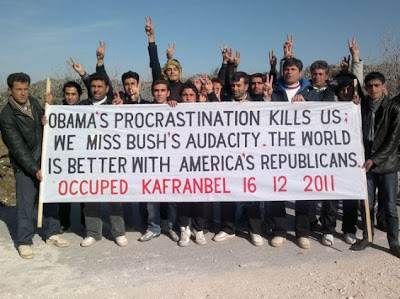 In fact, the world misses Bush a lot. While the legacy media desperately tries to spin Arab Spring as the people rising up to overthrow dictators, what's happening is radical Muslims rising up to replace dictators with their own tyrants.

And people who long for liberty that they saw a glimmer of hope for under President Bush are caught in the middle. The Syrians pictured above are being obliterated for daring to stand up to a tyrant, as are Egyptians youths and Christians all around the Mediterranean Sea.

President Bush had a clever plan: Isolate Iran by setting up west-friendly democracies on either side. The invasion and destruction of the militaries of Afghanistan and Iraq was so fast, so stunning, and so effective that the entire tone of the region changed. Libya's dictator spontaneously and voluntarily gave up his WMDs. Saudi Arabia started to crack down on terrorists in its midst. The world was changing.

Then... the left got its traction.
They couldn't stand a Republican being successful and popular, they couldn't stand Democrats not being power, and they were outraged, infuriated by the fact that President Clinton's victory didn't obliterate conservatism and Republicans. They were so sure that the Clinton years had destroyed Reagan's legacy and ended the long nightmare of prosperity, tax cuts, patriotism, and American strength. They thought it was all going to be better, then Al Gore lost. 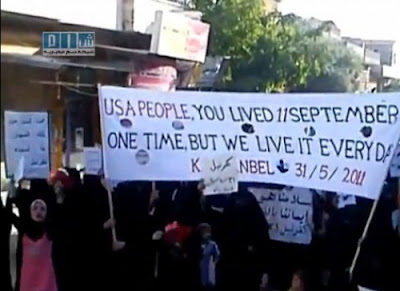 Sure they blew a gasket and pretended Gore had really secretly won, but they knew better. They were enraged because a Republican was back in power. And in 2002 when Republicans took over all of congress, they saw their efforts to change America into their leftist utopia were going to be dialed back. They went absolutely insane.

I remember well the incredibly lunatic screaming fits that the left threw, the half-decade tantrum of kicking and screaming and throwing things around. And bit by bit, the legacy media, the entertainment community, the leftists who were everywhere on the internet repeating the same lies over and over and over and over again, totally ignoring the truth and any attempt to refute them wore people down.

Over time, that momentum of democracy and victory in the middle east was worn down, the demoralized, terrified, and shocked terrorists and Islamic radicals began to regain their morale. And every day that went by, treacherous leftists in our midst spared no expense or effort to help build that morale back up. To be sure that wasn't their intentional goal, but the results were terrific: chaos in Iraq, reversals of American esteem, failure, death, destruction and best of all: Bush lost his popularity and Democrats were put back where they belonged - in power in congress. 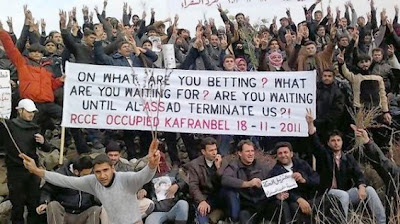 So all that effort, all those years, all those lives, all that money, and all that hope was destroyed. The people who wanted freedom and hope in the middle east saw America start to shrink away from its job, start to lose its support at home. They saw finally the people who got them closer to freedom thrown out of power and someone who specifically and repeatedly opposed their liberty and continually criticized efforts to help them become president. Funding to help bring democracy to the region was slashed. Efforts on the ground were removed as offensive and imperialistic.

So now, the inevitable collapse of each of these regimes so carefully crafted by the now-hated Neocons of the Bush administration are falling into the hands of even worse people, even more radical Muslims. Everything they worked for is going the opposite direction specifically and directly because of the left in western civilization.

For them, no price was too much to pay for regaining power. No cost was too high, because they're so clever, and good, and enlightened that they can fix it all. Just bow a few more times, President Obama. Just make a few more speeches about how Islam should be let to do anything it wants. Just issue a few more statements condemning violence by people fighting against tyrants. That will make it all better.

You have a lot to answer to on the left. I'd hope that some day the truth and your consciences would finally come to haunt you, but I'm beginning to think a lot of you are impervious to the truth and have no conscience.

Because all these people are paying the price for your unbridled lust for power and idiot's dream of a social justice utopia. They're being tortured and maimed and dying because of your dream. And that always seems to happen, doesn't it? Every time the left has a revolution there's always a field of skulls buried nearby and careful education to get people to ignore it.
Posted by Christopher R Taylor at 12:28 PM

If I understand you correctly, you believe that internal American opposition to American policy in Iraq was a significant factor (maybe the most significant factor) in the increasing vitality of Islamist parties in the middle east.

Granted that it might be a factor but I doubt it was more than a very minor factor. The Sunni terrorism in Iraq was mostly generated by Iraq centric forces and the Islamists in egypt have been mobilizing for decades.

Certainly, the US has been cautious in Syria but because the anti Assad forces didn't actually control any territory (unlike in Libya), this makes use of US force essentially impossible.

Its a combination of things, including the opposition at home, the replacement of government with one hostile to efforts to bring democracy to the middle east, and a shift in policy by the Bush administration forced by a new congress and the loss of political will in America.

Would the Bush policy have worked if none of this had happened? Its hard to say, it was a pretty big gamble. All I know is, it never was given a chance to work by people who wanted power so bad they hung out all those people to die.

A liberal told me that Obama showed in Libya how to effectively weild US power.

I told him I agreed. The secret is "Have the media pumping out propaganda for you worldwide, instead of trying to make you fail, and have a loyal opposition that puts America ahead of party, not Democrats."