CHRISTMAS CAROLS YOU DON'T KNOW - Light of the World 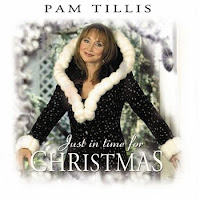 This is the second Carol written by Pam Tillis on her Just In Time for Christmas disc. The tune is very similar to "Beautiful Night," and both songs would spin together well in a medley, but this one probably should be first to set the tone and reason behind the gathering describe in the other carol.

Although the wise men (unknown number) arrived several years after the birth of Christ, they probably arrived in December (the 25th, if Rick Larson is correct), they did arrive to worship the newborn king. He wasn't actually in a manger at that point, Mary and Joseph had moved into a house by then, but the theme of this song still holds together well.

Jesus was called the light of the world by John in his gospel, described as coming to a lost, darkened world to bring light to the world, and Christians like the moon dimly reflect the brilliant light of Jesus in the world.

There's no video for this song, sadly, and I don't care to work one up just for this, so you can go to Pam's website and listen to the whole album if you want, or skip to track 3 on her Christmas disc and listen to the song.
Wise men in search of a child
Follow the light of a star 'til it came to rest
Over that holy place
Where they saw in his face
The light of the world