Hallelujah Noel be it Heaven or Hell
The Christmas you get you deserve
-ELP, "I Believe in Father Christmas" 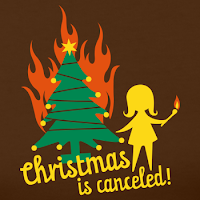 Over the last two weeks I posted several Christmas Carols people don't generally know; gems that I wanted people to know about. Among them was "Beautiful Night" which isn't specifically a Christmas Carol, but the song is so beautiful and I wanted to let people know about it. But that got me thinking about other Christmas songs that aren't really about Christmas. And there are quite a few.

Most of them are secular songs, such as Happy Xmas (War Is Over) by John Lennon. Although released around Christmas and sort of mentioning the day (putting an X over Christ in the title) its an anti-war song.
A very merry Christmas and a happy New Year
Let's hope it's a good one without any fear.

And so this is Christmas and what have we done
Another year over, a new one just begun.
The Vietnam War was declared over, abandoning the country to horrendous evil and reprisals by the Communist government Lennon supported, and he created this song to celebrate that event, as if when official declared war is over, peace reigns - a common mistake.

The Beach Boys have a popular bit called "Little St Nick" over their music for "Little Deuce Coup" which was basically a car song about Santa Claus and his sleigh:
And haulin' through the snow at a frightenin' speed
With a half a dozen deer with Rudy to lead
He's gotta wear his goggles 'cause the snow really flies
And he's cruisin' every pad with a little surprise
Not only is it about Santa Claus rather than the Christmas event, but it isn't really about Santa either, its about driving fast and being cool. There's not even anything about presents.

Then there are songs like Emerson Lake, and Palmer's I Believe in Father Christmas, which is basically an anti-Christmas song:
They sold me a dream of Christmas
They sold me a Silent Night
And they told me a fairy story
'Till I believed in the Israelite
And I believed in Father Christmas
And I looked at the sky with excited eyes
'Till I woke with a yawn in the first light of dawn
And I saw him and through his disguise
Its a beautiful song and people play it around Christmas, but its basically saying "the whole story is a lie." And the Kinks have the song "Father Christmas" which is basically a social statement about street toughs, the poor, and inner city life:
A gang of kids came over and mugged me
And knocked my reindeer to the floor

They said:
Father Christmas, give us some money
Don't mess around with those silly toys.
We'll beat you up if you don't hand it over
We want your bread so don't make us annoyed
Give all the toys to the little rich boys
Its kind of a fun song and Rick Davies has a great story about how he played that as an encore when they were opening for a bigger act. He wore a Santa outfit and stole the show, and the next show, they wouldn't let him on stage in the outfit. The crowd just saw Santa being denied access to the stage and were upset at the main band anyway.
And, of course, there's the rap versions of songs like Snoops Dogg's "Santa Claus Goes Straight To The Ghetto." Kanye West isn't the sharpest pencil in the box (few rappers are, really, although they usually are really capable actors). "Christmas in Harlem" is not really anything different than the usual rap song, just set on a certain day of the year:
The streets lit up, it feel like Christmas officially
Told her that, "You the star at the top of my Christmas tree"
My only question is, "Where my presents?"
She said, "Shhh," she got a gift for me that ain't for the kids to see

Well, I like the way you think, mami
Now pour some more eggnog in your drink, mami Y
ou've been a bad girl, give Santa three kisses
Gave her the hot chocolate, she said, "It's D-ricious"
And so forth (no, that's not a misspelling, its quite acceptable in rap to mock Asians while lusting after them). Run-DMC had an earlier song called "Christmas in Hollis" that was actually a bit more seasonal, and I suspect Kanye was inspired by it.

Most of these songs are about the idea or event of Christmas as a modern holiday than the actual holiday and what it means. They are about decorations and food and a party, but not about, you know, Christmas, the celebration of the birth of Christ. And that's not surprising because I suspect most of these artists could care less about Jesus, care less about giving, joy, or the true meaning of peace. I suspect they care about their own lives, their own goals, and themselves significantly more than anyone else - sometimes that's what it takes to make it big in entertainment.

And since our culture has gotten so hostile to Christmas as an idea that there's bold Ramadan celebrations but clerks are told specifically to not say Christmas, its no surprise the popular culture is following suit.
I'll leave you with this song by Spinal Tap, mocking heavy metal music again.

No bells in Hell
No snow below-
Silent Night, Violent Night

So come all ye unfaithful
Don't be left out in the cold
You don't need no invitation, no...
Your ticket is your soul
Again this is about the trappings and images of Christmas rather than the event its self, but there's a difference: these guys are mocking this kind of song and the silly devil lyrics of so much heavy metal music. Here are the boys performing "Christmas With the Devil" for your enjoyment:

Posted by Christopher R Taylor at 10:05 AM

Not being a Christian, most of the positive associations I have about Christmas time are related to family togetherness, contemplation on our blessings, the thrill of giving and receiving gifts, and the various secular Christmas traditions that have been established in America over the last century or so. So it stands to reason that most of my favorite Christmas songs are secular in nature, but I've always found it interesting that my favorites were written in a era that most people associate with very religious Christmas traditions: the 1930s-1950s.