BEST OF WATN: A Black Future

"The problem with all these additional government jobs is that government spending does not create the economic growth needed to sustain private sector job growth."

Bleak probably would have been a better word in the title, but I wanted to play on the racism charges that would inevitably come up with government job cuts. The truth is, cutting jobs in a high unemployment situation might seem crazy but it would actually help a lot as the burden of government would be reduced, letting the market breathe better. Its like taking medicine that tastes horrible but makes you feel better after a while. Most good solutions are tough at first and take time to resolve.

This one got linked all over the place, and it contains some pretty useful stats for understanding a lot of why we're in the situation we are now. 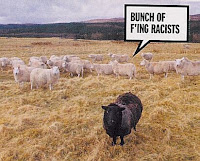 As with all economic down turns, the one sector that does well is the federal government. The Picture of the Day for today shows an explosion of regulatory agency jobs in just the last year, while overall federal government jobs have rapidly multiplied with nearly a 12% increase while all other job sectors have dropped by about 7%.

That shows a growth in the federal government but it also brings up a troubling fact, one that is impossible to avoid in the debt and budget battles. Senator Patty Murray (D-WA) touches on this fact with a recent op ed in the Wall Street Journal:

The fact is, all those studies being paid for like shrimp on a treadmill and all that redundancy, duplication, and misuse of funds involves people working for a salary at the federal government.

In other words, to fix the debt, we have to lose jobs. To trim the debt down and reduce government spending to a sane and survivable level lots of federal jobs are going to be lost. That's an inevitable consequence of the federal government bloat over the last few decades; lots of new jobs added, each costing money. When you cut the spending, jobs will be lost. And because a lot of that debt was created by adding new jobs, the direct and obvious solution is to snip those jobs away.

And it gets worse. Blacks are disproportionately represented in government jobs. In fact, hiring blacks in federal jobs is so out of norm with the general population that NASA has the smallest over representation by only hiring 49% more blacks than are in the general population. Blacks make up about 10% of the United States population, but make up about 20%* of the federal government jobs according to a 2010 study by the Office of Personnel Management.

So we're faced with a brutal dilemma: in order to lighten the pressure of the federal government on the economy and businesses so both can breathe and prosper, we're going to have to slash the government down in size which will result in many people losing jobs in a time of dire unemployment. And many of those lost jobs will be black jobs.

Now, which politician wants to stand up and actually do that? Which politician will vote and fight to slash jobs and fire lots of black people? And if that actually somehow takes place, what exactly do you think will happen in the press and in black America? How do you think that will be portrayed by a media which already is incredibly hostile to the idea of cutting anything in the federal government?

How do you think black activists and opportunists such as Al Sharpton will respond to something like that?

America will burn.
Making the case that these jobs have to be sacrificed - and further never should have been created in the first place because they are a drain on the public's funds is not possible without having a platform to speak. And the legacy media, not to mention the Democratic Party its self, will make sure there is no such platform by either burying or ignoring what is said, or distorting and spinning it to destroy anyone who dares point out what must be done.

Unless these jobs are cut and government trimmed back, our debt will destroy the economy of the richest nation on earth. And make no mistake, that means depression and devastation worldwide.

I cannot see any way, short of an act of God, for this nation to get out of this trench. We had a chance years ago and instead chose to vote more people in who'd spend more and more and I think its too late now.

*Excluding USPS workers; including them, the percentage of blacks is about 18%.

**UPDATE: President Obama has ordered federal agencies to push for more ethnic diversity in their midst. Apparently double the population's rate in blacks is not enough, for him.

***Commenter Phillip had this useful addition:

The ugly little fact is that many of those jobs started as low-level (around GS-04) positions in the metro DC area about the same time as the early 90s 'peace dividend'. The problem is that twenty years later the GS-04s have either been promoted and new positions created for them, or the positions were converted to higher level ones.

Digging those parasites out of the public body won't be easy, and I doubt we'll even really try.

Posted by Christopher R Taylor at 8:37 AM