"The whole reason profiling works, when and if it does, is because of a statistical propensity toward lawbreaking of that targeted segment." 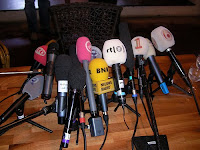 As Don Surber reminds everyone, I think the Republican presidential candidates are far too easily distracted from what should be their primary, laser-like focus: the economy. President Obama has done a horrible job and the GOP candidates need to hammer that and stop attacking each other. Their job is to demonstrate they're the superior choice to replace the president, not that their opponents are all losers and jerks.

Still, other questions will come up, such as an eleven-question challenge by CAIR, the Islamic activist group. You can tell its from CAIR because their idea of international issues is "Muslim-controlled areas" ignoring the rest of the planet. Here are their questions and how I'd answer, were I a presidential candidate:

1) Racial and Religious Profiling/Homeland Security: A number of law enforcement agencies use race, ethnicity, national origin, or religion to identify and target individuals for heightened security attention even where there is no indication of wrongdoing. Do you feel relying on these types of characteristics is an effective tactic for protecting America? If not, then what methods do you endorse?

I'm not aware of any government organization that is profiling based on ethnic, national, or religious origin. But they ought to be. Its just common sense to look out for the people historically and logically demonstrated to be the greatest threat, something the present administration seems unaware of.

2) Transportation Security (No Fly List): Many Americans report being subject to additional screening when traveling by air or through U.S. borders as a result being incorrectly placed on one of several government watch lists. Would you provide an effective, expeditious means through which persons placed on a government watch list could have themselves removed?

I agree that the watch list should be handled more carefully. Bureaucracy and politics are taking too much of a hand in this critical system.

3) Immigration Reform: Do you favor an immigration reform package that includes a path to legalization, an increase in family visas, and restrictions on the lengths of detentions? If not, what would you do differently?

My immigration plan would be to enforce the laws now on the books, expand the means and ease of coming through the system legally, and expediting the deportation of those who do not. President Obama has been vigorous in prosecuting businesses for hiring illegals, but has been lax in prosecuting the illegals themselves.

4) International 1 (Afghanistan): What is your plan for bringing our troops home from Afghanistan without sacrificing American prestige and regional stability?

My plan for bringing the troops home from Afghanistan is to remove the rules of engagement now handcuffing our troops, give them the numbers and support they need to finish the job, and bring them home victorious. Unlike the present administration, my goal would be victory, not ending the fight for liberty and stability in Afghanistan.
5) International 2 (Arab Spring): Popular protests and upheavals across the Middle East and North Africa have toppled authoritarian regimes and provided new hope that democracy will emerge in the region. How will your administration support this ongoing process of regional democratization?

Since no democracy is resulting from these upheavals, I believe that we should work harder to support those who wish to see liberty, work harder against those who would destroy it, and give vigorous, public, and steady support immediately to defenders of democracy in these areas, something lacking in the present administration.

6) Healthcare (Insurance Coverage): What is your solution to the twin problems of rising healthcare costs and large numbers of uninsured people?

The problems you list are the same: costs are too high. Controlling lawsuits, reducing needless and burdensome regulation, streamlining insurance laws, and targeting costs would all result in a better system in time. Instead of a gargantuan, business-crushing government program, what is needed is more liberty to allow the market to deal with this problem.

7) Government Benefits (Social Security and Medicare): How would you oversee the administration of the nation’s Medicare and Social Security benefits?

I would oversee the gradual cutting off of these unconstitutional programs which are rapidly approaching collapse in any case. Better to control their demise and shift the burden of cost and protection to the states where money would be spent more efficiently than try to prop up what is certainly doomed.

8) Education: In December 2010, the Organization for Economic Co-operation and Development (OCED) released a report that lists our nation’s high school students 25th among industrial world nations in math, 17th in science, and 14th in reading, while China’s Shanghai topped the charts. What is your plan for effectively educating our children and keeping our workforce internationally competitive?

School choice through charter and private schools would introduce greater competition while giving parents more options for their children's education. For decades we've been trying to heap more government, more cash, and more oversight on education and all we've seen is the quality of education drop. Clearly, that's not the answer.

9) Economic Empowerment 1 (National Debt): The United States lost its top-tier AAA credit rating from Standard & Poor’s in August 2011, and the national debt stands at $14.71 trillion. Many candidates have stated that they will eliminate the national debt and restore America’s credit rating without cutting government services to the neediest. How will you solve the debt crisis?

As president I have only slightly more power over congress than you do as an individual citizen, but I would encourage congress to reduce spending across the board, sign only a balanced budget, and would use my power over the various agencies of the executive branch to reverse the destructive and hostile policies of the previous administration toward business. This, combined with real cuts and rollbacks in the size of the executive branch would generate genuine debt reduction and stimulate the economy to create more tax revenue to pay down the debt. The answer to our debt is not more massive government spending.

10) Economic Empowerment 2 (Revitalizing Economy): The current economic downturn, lack of trust in the financial market, and high unemployment rate has left far too many Americans struggling. What is your plan for the revitalizing the economy and reducing poverty in the United States?

My plan for revitalizing the economy and creating jobs is to immediately suspend all application of the Health Insurance Takeover Act, reduce regulation and rules that are choking the life out business, and create policies that would directly enhance the business climate and market of the United States. The entrepreneurs, businessmen, workers, and ambitious people of America would provide the growth and jobs needed as a result.

11) Civil Liberties (Protecting Civil Liberties): Following the February 2011 reauthorization of the USA PATRIOT ACT, and revelations about the FBI and NYPD-CIA respectively carrying out domestic spying programs, civil liberties groups and Members of Congress continue to raise concerns over government intrusiveness into private life and the post 9/11 erosion of civil liberties. What measures will you implement to ensure the protection of the civil liberties enjoyed by Americans?

One of the first tasks in my administration would be to audit and examine the intelligence and law enforcement agencies to determine their cost efficiency, legal activity, and how redundant and necessary each task and effort is. Duplication, misuse of power, illegal activity by the previous administration such as the "Fast and Furious" program would all be swiftly and immediately dealt with.

And now that I've dealt with these questions, I'd like to suggest we focus on the most important aspect of this election season: the economy. Whatever other pressing issues there are today, all of them pale in comparison to the misery and poverty the unemployment, inflation, and lack of growth is causing to the American family. Unless that is dealt with, unless more jobs are created, and unless the economy is turned around, this great nation faces a difficult and troubled future which will compound all other challenges. We must replace the President with a better applicant, rejecting a smooth-talking dilettante with a professional who can do the job well. Slogans and a slick campaign do not make up for lack of experience, inclination, and personal ability in a job.

My campaign would be based on how President Obama applied for a job, snowed the interviewer, and has demonstrated he's incapable of doing it, so he must be replaced. It would focus on the race as a job application, something everyone can easily understand and relate to. And my response to any trick question, off-the-wall oddity, or obscure topic would be consistent: "get back to me on that after we have the economy back on track."

I'd never get the nomination, and the Democrats would run ads designed to terrify the elderly and minorities back to back every hour based on my answers, of course.
Posted by Christopher R Taylor at 10:28 AM