ADVICE FROM THE FOOLISH

"Life is not fair. Get used to it."
I'm 46 years old, and like most people I look back on my life and think of a few things I'd have done differently. I don't have a lot of regrets, unlike many, because I tend to be more philosophical about the past: I can't change it. Still, there are things I wish I'd known. 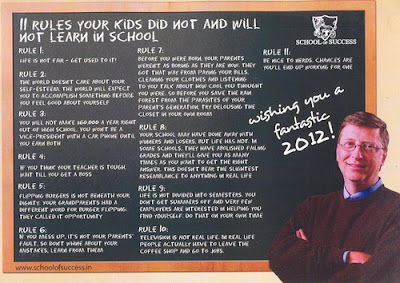 So for those who are younger or looking for a bit of advice from someone not terribly old, but who has seen a few miles, here's a few thoughts.

The truth is, most of these I'm still trying to learn. But they're things I wish I'd learned a long time ago. And perhaps by learning them I could have been a better man. We all have a lot of growing to do, no matter how old we are, and we all make stupid mistakes and fail. Failure is a hallmark of the most successful, in truth, yet success is utterly empty and vain without a purpose beyond this world, as The Preacher notes in Ecclesiastes.

So the most important advice is to get right with God, because life is short, but eternity is forever.
Posted by Christopher R Taylor at 9:05 AM

Personally, I prefer the negative formulation of the Golden Rule: "Don't do unto other what you don't want done unto you." This avoids uncomfortable encounters with, for example, masochists.

Great list, C_T. Lots of good stuff there. The only one I take issue with is the Teddy Roosevelt quote... in my experience sometimes it is better to do nothing if you're not sure which decision is the right one. Often if you just wait, even when the moment is demanding that you make a decision, the correct choice will become more clear as the situation unfolds. Most of the time you'll find the only reason you felt pressured into making a decision so quickly in the first place is to help fulfill someone elses agenda... and more often than not that person could care less about what the best outcome for you is.

Of course, I realize I am arguing with Teddy effing Roosevelt here, so I am probably wrong about that.

I especially agree with the part about not being self-conscious because most likely no one noticed you.

Brilliant article, I've taken notice of these and I think there great things to remember, thanks a lot!