"even though I do well, that I don’t associate myself with those who do well."
-Michael Moore 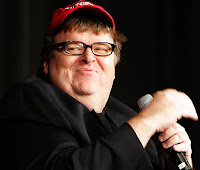 Michael Moore, exploiter of his workers and a man worth fifty million dollars visited Occupy Oakland recently. Here's how it went, according to the Matthai Kuruvila and Kevin Fagan at the San Francisco Chronicle:

As the camp grew in size Friday, filmmaker Michael Moore flew in to pump up supporters.

As he made his way to the front of the plaza, he was swarmed by many of the gathered 1,000 or so protesters screaming, "We love you, Michael!" and "Thank you!"

Moore's talk was like pouring honey on the plaza. They ate it up, and he clearly enjoyed them.

"Occupy Oakland! Occupy everywhere! I am honored to be here!" he yelled through a microphone.

As he ticked off a litany of the complaints that spawned the Occupy movement - lack of health care, economic disparity, corporate greed, joblessness, reduced wages - the crowd roared its approval.

"This is a leaderless movement with tens of millions of people," said Moore, who flew in to Oakland to address a booksellers convention. "Weather is not going to stop us."

Then he went back to his posh hotel room and eventually flew back to his mansion in Michigan. The occupiers had no patience or time for the businesses they were destroying:

The owner of Sankofa African Arts and Jewelry said that on the two mornings since protesters returned, her front doorway has reeked of urine.

She said her business has declined by 80 percent since Occupy Oakland began.

"I really, really want them to leave," said the owner, who gave only her first name, Ellen. She has owned her business for 17 years. "What they are doing is making business worse."

A camp supporter overheard her lament and shouted: "You would have lost your business anyway with the way the economy is going."

Who cares who gets hurt as long as we can party in the streets! Wooo! Zombie recently complied a partial list of supporters, donors, and sympathizers for the occupy movement. It includes such luminaries as
Oh and House Minority Leader Nancy Pelosi, Vice President Biden, President Obama, Ben and Jerry's Ice Cream, Al Gore, AFL-CIO head Dick Trumka, indeed the whole Democrat Congressional Campaign Committee also endorse and support the occupiers.

Our brightest and best, according to the left.

*UPDATE: meanwhile, 15% of Oakland's teachers took the day off to go sit with the occupiers there and protest budget cuts. I have an idea, cut 15% of the teaching staff, they volunteered by stating that they really weren't needed on that day to teach.
Posted by Christopher R Taylor at 7:33 AM