"I must stop this *whole* thing! Why, for fifty-three years I've put up with it now. I must stop Christmas from coming... but how?"
-The Grinch 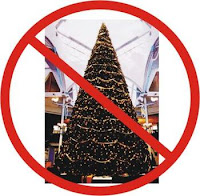 Christmas trees are in the news lately. President Obama's Agriculture Department is imposing a 15 cent-per-tree fee on all Christmas Tree sales in America, claiming the money is for "improve the image and marketing of Christmas trees," which is not only ridiculous on its face (do Christmas trees have an image problem? Damn their symbolism of cheer, gift giving, and joy!) I doubt there's a single human being on earth that believes this is where the money will go in any case.

The fee only applies to sellers of 500 or more trees a year, and naturally only will be possible to collect from businesses rather than farmers, for example. Around here, trees are so plentiful its hilarious to see the prices on trees in the Midwest, for example. I can go to a local farm and cut down my own tree for under ten bucks and carry it home, a big, beautiful one. Of course we use an artificial one to save trouble and money (and it looks terrific).

And those farmers selling trees? They can sell more than five hundred. They'll just flip off the government and take cash like they always do, and I'm not convinced they pay any taxes on the trees they sell. But seriously, a Christmas Tree tax? Really? Is that the Obama plan for helping his poll numbers? What's next a tax on hugs? This isn't exactly going to help quash the "he's a secret crypto-Muslim" rumors.

*UPDATE: The Obama administration has backed off this ill-considered plan. The theory behind it was that since people are buying so many artificial trees the Christmas Tree industry needed help... so instead of advertising, they came up with this bright idea; cronyism at its worst.
Posted by Christopher R Taylor at 10:40 AM

Update, they've backed off on this no new grinch tax this year.