"I have yet to see a real, credible plan that raises revenue in a significant way to bring us to a fair, balanced proposal"
-Senator Patty Murray (D-WA) 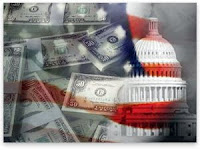 A few days ago I criticized Representative Simpson for his "lets raise taxes" idea despite signing a no-taxes pledge. The idea made it through the Republicans on the "supercommittee" which is supposed to be finding ways of cutting the debt, and all the Democrats rejected it.

Why? Well two reasons. First, the GOP idea made the Bush era tax cuts permanent instead of having a re-vote every few years. And second, because the Democrats didn't think it was enough of an increase in taxes and had too many cuts. Lori Montgomery at the Washington Post reports the Democrat response as this:

Democrats said the tax increases in the GOP offer would be dwarfed by major new tax cuts for the nation’s wealthiest households, including a reduction in the top income tax rate from 35 percent to 28 percent.

That's code for "they won't let us raise taxes by the highest amount in American history." And that's basically what the Democrat contingent is holding out for: killing the Bush era tax cuts with GOP assistance. The other comments from the Democrats were some mumbles about "fairness," meaning "rich people get gouged while cutting as little as possible from actual spending. Senator Murray's quote at the top indicates the Democrats haven't even offered any plan she'd accept. She just doesn't want what Republicans offer.

The tax increases included a change in how inflation is calculated to get people into higher tax brackets faster, changes in fees and how medicare costs are calculated and other accounting tricks to increase people's payments into government services and cuts totaling about $600 billion. The goal is to cut $1.7 trillion bucks over a few years, including interest payments, but there's no realistic hope any such thing will take place.

Its possible Simpson and the other Republicans who signed on to this attempt were doing so only to get political mileage out of the Democrats rejecting the offering, knowing it would never go anywhere, but they shouldn't even ever pretend to raise taxes through any method. The problem isn't that the government is getting too little money, its that the government is spending far too much.

And since most of that spending has been piled on to giveaways to poor people, "green" energy startups, massive new programs, and leftist schemes, the Democrats will always characterize cutting back that new spending as unfair because its primarily things that benefit poorer people. So they'll never agree to it unless there's at least as much in tax increases on richer people in the name of "fairness." Essentially they've stacked the scales massively in one direction then refuse to let any of that go unless more is given up somewhere else.

You know what would be fair? Slashing back the federal government to constitutional limits. But then that would eliminate most of what the left considers "fair" and raise no taxes on anyone.
Posted by Christopher R Taylor at 7:55 AM