SONGS I LIKE: I Know You Got Another Man (Paul DeLay)

Well I've had about 400 girlfriends, and one thing I know is: women cheat. 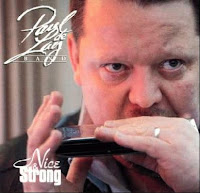 Paul DeLay was a local blues musician in Portland, Oregon. He was in and out of jail and lived a pretty rough life, but all the while produced good music and entertained people in the area for decades. While he was in jail, the band was known as No DeLay, and when he was out, the Paul DeLay band. The band put out 12 albums over the years until Paul died in 2007 not from his lifestyle (he'd given up the drugs by the 90s) but leukemia. The members of the band put together a memorial blues show every year for him.

Paul DeLay never hit it really big, but in blues circles he's well respected and liked. A very talented songwriter and harmonica player, Paul DeLay's work was some of the freshest and most original blues out there. In fact, a lot of his work was a sort of anti-blues, with upbeat and interesting songs such as several tracks on Nice And Strong about how great his wife is. He had a few big blues sellers such as "14 dollars in the bank," and his album Heavy Rotation was a number one seller on the Blues charts for weeks.

The song "I Know You Got Another Man" is classic DeLay; taking a standard blues theme and giving it a unique twist. The song starts out with pretty classic stuff, with a man complaining about his cheating girlfriend, describing all the things he discovers. But as the song goes on you start to realize that he's a bit off base, and by the end you wish she'd find another guy because this one is a jerk.

The whole disc is full of songs like this, such as the one asking women what kind of guy the want because they seem to pick losers, and when in "Come On With It" he sings "you say you don't date blues musician guys? Guess what babe, neither do I!" you know you've found someone pretty clever and fun. If you like the blues and are looking for something new, find Paul DeLay, you won't be sorry.
You talk about your devotion, always acting nice and sweet
Well I've had about 400 girlfriends, and one thing I know is: women cheat.

How dumb do you think I am?
I know you got another man.

I come home and you've washed the dishes... aha!
Then I find out, you changed the sheets;
You think I'm not gonna get suspicious?
Ha! Listen baby, you ain't foolin' me.

How blind do you think I am?
I know you got another man.

You want my car to do some shopping?
Smile and say you'll be right back;
Bring home two big bags of food
You think I'm gonna fall for that?

What kind of fool do you think I am?
I know you got another man.

I saw you talkin' on the phone
I got to pick up the other line;
I don't know how you always do it
But you always get your mother on there just in time!

How nuts do you think I am?
I know you got another man!
Unfortunately, there's not much video out there of Paul's music, but here's another song called "All My Money Gone:"
This is part of the Songs I Like series.
Posted by Christopher R Taylor at 8:06 AM