PRODUCT IN THE PLACE OF ARTIST 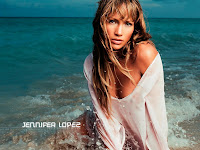 Jennifer Lopez, singer, actress, writer, and overall entertainment girl. She's all over the place, and now she's pushing this squat goofy looking Fiat 500 in advertisements. Buy it girls, and you can be like J-Lo! It will be a constant party of fun and cute boys! Paint it pink and decorate it!

Jennifer Lopez might very well be a nice enough person. She is a fairly capable actress, I liked her in Out of Sight and other movies she's been in. I don't care for the music she sings, but she's not terrible at it. The problem is, she's a product, a packaged deal.

A few years back I wrote about a payola scandal that happened in California. DJs at radio stations were being paid to play songs - mostly Jennifer Lopez - by Sony Music. She's pushing this Fiat pretty hard, including an appearance at the American Music Awards when the dancers gave way for the 500. The ad with her driving this little shoe-shaped thing was done with CGI, she was never in the Bronx neighborhood the ad shows.

From her perspective, its just a job; what's the difference between a fake ad for a car and playing a fake Federal Marshall in a movie? But from the perspective of Sony, she's a lucrative commodity, she's a property they're pushing in all their entertainment line. There are songs, beauty supplies, garden tools, music sheets, software, movies all with her name; you can get J-Lo jewelry and clothing and books. She's everywhere, because Sony sees a way to make money off her in all these ways.

And that's much of the problem with modern entertainment, particularly music. The artists are chosen for how marketable they are, how easy they are to package and sell. Justin Bieber might think he got so popular because of his hard work and talent, but there are thousands of guys like that out there. He was just the most marketable, according to his agent and the label that gave him a contract.

This is why so few people have sympathy for the plight of entertainment corporations. They're not just soulless and money grubbing, but they destroy the creativity and art they're allegedly built around. Yeah, its wrong to steal but most people shrug at downloading songs or movies because the companies are so repulsive. The product is usually not worth much money anyway, but they try to charge so much for every single piece.

This near-total control of entertainment giants like Sony, Time-Warner-AOL and others is extremely bad for music, movies, art, and so on. Yet when it comes time for another merger, the government which heavily scrutinizes every other industry shrugs at entertainment. The attitude seems to be that can it hurt for one company to own cable channels, magazines, movie studios, record labels, theaters, printing companies, publishers, and so on all at once?
I'll tell you what it hurts: it destroys culture by putting out crap. Nearly everyone in the world believes modern popular music is trash. If you aren't sure, listen to a few hours of top-40 and most downloaded songs. When you regain your sanity, listen to even bad music from before 1995. The difference is so profound you'll be close to weeping.

And there's more to it than that. Music and popular entertainment helps shape the younger generation. Taylor Swift recently told 60 minutes that music is basically raising the next generation, because they're constantly listening to it and all those ideas and concepts are pumped directly into their head in a way that reason and logic is bypassed. Music in particular reaches us in a way that is separate from our thoughts, it affects our souls more directly. Its incredibly powerful.

Do you really want a big corporation only interested in making the most money, devoid of any ethical considerations or virtue, raising your kids with this immensely powerful tool? You might think Rhianna and Lil' Wayne are harmless, and if your 14 year old daughter goes berserk when you tell her she can't listen to that crap then you should let her. But she's learning about life from these songs. What's she learning? (strong parental advisory):

You know them hoes love Weezy
Sticky, pimp small, long hair, big d*ck
Weezy bring to y'all
Don't y'all lip quit
Put your lips on this d*ck
Let me get on some livin'
Spit all over ya chin...
-"Act A Ass," Lil' Wayne

Our love, his trust
I might as well take a gun
And put it to his head
Get it over with
I don't wanna do this
Anymore, anymore
-"Unfaithful," Rhianna
Justin Bieber's lyrics are generally vapid and repetitive like Black Eyed Peas, but at least he's not pernicious. You'll just end up a drooling cretin if you listen to much of it. And that's what we're getting, because anything more creative, edgy, interesting, and unusual is scary to record companies. They want what they can control and trust, not what is artistic and exciting.

They can't control artists and innovators. They can't rely on a really great band to do what its told. They can't get predictable, easily marketed results out of a new Guns 'n' Roses or Yes. They can't put that together in a package with dozens of other lucrative products, because artists like that will say "Cologne? Are you nuts?"

So we get what we have here. And since people keep buying this vomit, they'll keep it up.

*UPDATE: The Fiat 500 filmed with J-Lo's body double in it for the ad broke down during filming the commercial. Chrysler strikes again.
Posted by Christopher R Taylor at 8:17 AM