“Why publish the story then when you couldn’t answer the essential question: What precisely is Herman Cain alleged to have done to these women?” 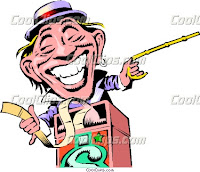 Is Herman Cain guilty of sexually harassing women while he ran Godfather's Pizza? I don't know, its possible. Even more possible, given the times, is the idea that these women just wanted a sweet retirement package and complained with lawyers about stuff no sane person would consider sexual harassment until they got a settlement.

What is clear is that Politico ran with this hoping to get a big scoop and damage a growing star in the GOP candidacy but has ended up looking like idiots. Andrew McCarthy at National Review Online explains Politico's problem:

This isn’t a game-show where the host has the answer on his little card and his job is to have the contestants keep guessing until someone stumbles into the right answer. This is supposed to be news coverage — professional journalism about a serious matter with a goal of edifying the reader about what actually happened.

Politico has now framed discovery of the identity of the source as is a noteworthy story. Yet,Politico knows that if the identity of the source is a story, it is only because Politico itself is being coy.
...
In fact, both the Perry and Romney camps have denied involvement — if it so happens that one of those camps is the source, then Politico knows the denial is a lie, yet it published the denial anyway. That would amount to colluding with its source in order to tarnish Cain while fraudulently portraying its source as above the fray.

Basically, they have no story except rumors, have more information they refuse to share because it keeps the story alive, and is colluding with someone to cover up the source of the story.

And the interesting thing is that while this would have destroyed a candidate's political future a few years ago, it seems to have actually helped Cain because of the negative reaction voters have to a press assassination attempt.
Posted by Christopher R Taylor at 8:52 AM

You know what else I find interesting? These events didn't supposedly happen when he was at Gofather's pizza. All the accusations come from when he was CEO of the lobbyist National Restraunt Association.

So, without any other facts, we can consider that Herman Cain had a long carreer in many different industries and with many different companies, free of any of this kind of controversy.

Hey Eric, are you guys ok? I understand there was a bit f ground movement back in your neck of the woods.

Joel, thanks for asking! We are fine here, three decent sized earthquakes in the last three days. I was driving during two of them and couldn't tell they were happening, and slept through the third (my wife always said I could sleep through an earthquake, and now she has proof).

Last night one part of the state had an earthquake and a tornado at the same time. I'm taking out volcano insurance tomorrow.