"How can someone who has planned this for such a long time... be considered insane" 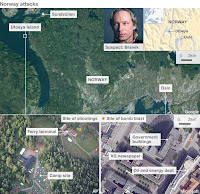 Remember Anders Behring Breivik? The fascist who was called a right winger by every media source on earth until it was obvious he wasn't? The man who shot hundreds of people, killing 77? The Norwegian authorities looked awful by not responding to cries for help on the island until too late to save scores of lives. The Norwegians on the island were utterly unable to fight back, unarmed, and even thought it was some kind of test at first.

And now, the Norwegian courts have decided that Breivik shouldn't go to prison. We all knew he'd be at worst put in a comfortable country club style prison for part of his life, get out after a while, and never face the death sentence. But the courts have decided he's insane.

Well, yeah. Anyone who takes a rifle and shoots at, wounding and killing 228 people is insane, that's a given. But then, its rare to kill anyone without being insane. The truth is, this guy's philosophy of life and his ideas are boilerplate fascism, he'd be a jackbooted SS trooper in WW2, like thousands of others. Crazy? Sure. But then so were all the guys at the Nuremberg trials. So was Hitler, Goebbels, Hess and so on. So were most of the SS and Gestapo. So were the death camp guards and commandants.

Putting this guy in an insane asylum is might seem like the most reasonable reaction to the emasculated leftists in Norway, but they really could use a bit of the Viking at this point because he's never going to get better. And justice, not to mention the blood of all those innocent people cry out for justice, which is not served by sitting and talking to him about his feelings.
Posted by Christopher R Taylor at 9:19 AM