"Another one bites the dust" 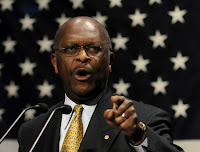 Herman Cain is probably about to drop out of the presidential race. Like I said a while back I liked Cain and he's got the most impressive resumee of the GOP candidates (and is one of the smartest) but he wasn't ready yet. He could have been a good VP candidate and in a term or maybe be ready to run for president, but not now.

The Obama team has a history of smearing candidates so they don't have to face them or remove them from running on topics utterly unrelated to their ability to do the job. Jeri Ryan's nasty divorce details had nothing to do with the ability of Jack Ryan to be a state legislator, but the Obama team with more than willing accomplices in the press made sure that's all people thought about and focused on.

And, sadly, a lot of right-leaning blogs and sites piled on too. Mostly they did so out of an abiding terror that Cain would win and the certainty that he couldn't beat President Obama (at this point my cat's bones could, but they were afraid). So they wanted to stop him, diminish his momentum and move people away from Cain toward candidates they thought were more "electable."

In the process they did President Obama's work for him, for free. They helped smear Cain so badly that now he probably has no political future or career. And the Obama team is probably throwing a party now, because Cain would have obliterated Obama's only remaining strength: vote for me, honky, or you're a racist.
Posted by Christopher R Taylor at 11:12 AM

I disagree. Scandal or not I do not think Cain was a viable candidate for the Republican party. I think more and more Gingrich is going to be their guy. I do not see Romney making it happen for them but as much as I am not a fan of the present administration I do not see the Republicans winning the next presidential election.

Well as I said, he didn't seem ready to me, maybe as a VP and later on a candidate for president.

Right now it looks like the Republicans will go with Gingrich but I don't think Perry is finished yet.