"Every patch, every badge has its own history and its own story to tell"
I've never been in any military, so when I watch war movies or shows with soldiers I always hope they're accurately portrayed. Sometimes I know for certain they aren't (M*A*S*H for example), but most of the time I take it for granted they did a pretty good job. From one historian I know, the movie Valkyrie (which was excellent by the way) was incredible in its details and uniforms.

Apparently, though, they don't often get it right. For example, here's an image from the movie Hurt Locker with a host of errors: 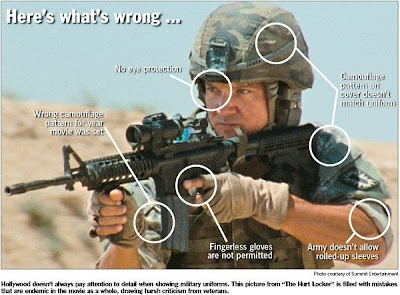 Now, I wouldn't have spotted any of that except the helmet, but people in the military do, and its as annoying for them as, say, a science officer wearing a red uniform on a Star Trek movie annoys Trekkies.

At Stars and Stripes, there was an article about exactly this and why it happens:

Not all movies hire a military adviser, said retired Marine Capt. Dale Dye, who has served as an adviser on a number of movies including Platoon and Saving Private Ryan.

In some cases, wardrobe folks like certain uniforms for the way they look, not whether they are authentic, he said.

"I don't allow that," Dye said, "If I see it, we go to blows. I've said to costume designers, 'Where the hell did you come up with this? What is this?' 'Oh, it just looked cool.' And it immediately comes off."

Sometimes the military adviser wasn't available for a shot and they just wing it, since Hollywood types aren't likely to have any contacts who have done any recent military service. And they don't care to research much, either.

Donald P Bellisario was in the Navy and he's a stickler for exactly protocol and uniform accuracy. That's probably why shows like JAG and NCIS are so careful to get those aspects right, even if they play it fast and loose with other details like police work and the limits of forensic science.

Incidentally the Stars&Stripes article clears up one rumor: it isn't illegal for entertainment productions to show cops and military in uniform. The Supreme Court of the US specifically ruled in 1970 that allowing proper and accurate depiction of uniforms in both job types.
Posted by Christopher R Taylor at 8:37 AM

I'm in general agreement -- but mismatched helmet/uniform patterns wasn't that unusual when I was in Desert Shield/Storm. Not all of us got issued DCUs. We came to the war in our BDU patterns. Some got issued DCUs, but there weren't always DCU-pattern helmet covers. and very often our body armor was still BDU and our rucks and web gear green, no matter what color our uniforms. Then, when they changed DCU patterns from chocolate chip to coffee and tea stains, things got even more mismatched.

But in general, screwed up uniforms, insignia, and anachronistic equipment irritate the crap out of me.