“What I’m about to say is all true. But under this system, we are not allowed to speak the truth” 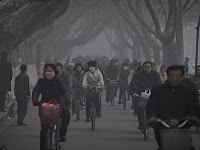 For a while now I've been insisting that the Chinese economy is built like a house of cards, fragile and unsustainable. I've asserted that it exists almost entirely based on American people buying cheap junk. And I am certain that corruption and sloppy manufacturing characterizes most of China's economy.

I've said this out of an instinct, an educated guess based on hints that have come out of the country and China's government and culture. There's no reason the country couldn't have a booming and strong economy, except for those two things. But I've had no real proof, nothing I could point to in order to demonstrate the validity of my guesses. Until now.

Larry Lang is the professor of Finance at the Chinese University of Hong Kong and he recently said on a TV show that China is essentially in the same economic state as Greece. According to Matthew Robertson at Epoch Times, he bases this assessment on five points:

Firstly, that the regime’s debt sits at about 36 trillion yuan (US$5.68 trillion). This calculation is arrived at by adding up Chinese local government debt (between 16 trillion and 19.5 trillion yuan, or US$2.5 trillion and US$3 trillion), and the debt owed by state-owned enterprises (another 16 trillion, he said). But with interest of two trillion per year, he thinks things will unravel quickly.

Secondly, that the regime’s officially published inflation rate of 6.2 percent is fabricated. The real inflation rate is 16 percent, according to Lang.

Thirdly, that there is serious excess capacity in the economy, and that private consumption is only 30 percent of economic activity. Lang said that beginning this July, the Purchasing Managers Index, a measure of the manufacturing industry, plunged to a new low of 50.7. This is an indication, in his view, that China’s economy is in recession.

Fourthly, that the regime’s officially published GDP of 9 percent is also fabricated. According to Lang’s data, China’s GDP has decreased 10 percent. He said that the bloated figures come from the dramatic increase in infrastructure construction, including real estate development, railways, and highways each year (accounting for up to 70 percent of GDP in 2010).

Fifthly, that taxes are too high. Last year, the taxes on Chinese businesses (including direct and indirect taxes) were at 70 percent of earnings. The individual tax rate sits at 81.6 percent, Lang said.

Once the “economic tsunami” starts, the regime will lose credibility and China will become the poorest country in the world, Lang said.

Here's the thing: no one can bail China out. They are entirely dependent on the United States buying stuff and we're not buying as much as we did a few years ago. Is what he says true? I wouldn't be surprised in the slightest.

The problem with China is that it is run by a corrupt dictatorship. They run their economy from the top down, which means the government is basically in charge of all business and finance. They tax the hell out of everything and then hand the money back out, which does not create growth and damages incentive.

You can't trust any tyrannical government's statements about its self. Not about any subject. They lie as a matter of national policy, and the Chinese have a strong tendency to consider themselves the masters of the world, the greatest, finest, most civilized, mature, and important people and nation on earth. So they are not going to report bad news until forced to. Everyone knows the Chinese cities have nearly unbreathable air. Nearly everyone knows they're the worst polluters on earth. Everyone but apparently the environmental alarmists know that Chinese are the greatest "carbon emitters" on the planet.

None of that comes from the Chinese government, who lies with a big grin on their faces. In fact, lying to save face and avoid shame is such an ingrained part of Chinese culture that they do it right to your face when both of you know better. They'll say whatever it is that makes them look as good as they think they should be, and too many people in the west believe them at face value, like they used to the Soviets. The reason the Soviets lost the arms race is because it never really was a race, it just seemed that way based on the lies and misinformation the Soviets were pumping out.

China is staggering which isn't good news for anyone. They control a great deal of the world's debt, and are an enormous manufacturing power. If China crumbles economically, that will deal an already teetering world economy a terrible blow. Even more seriously, that leaves China with little cash, a vast overpopulation of military age men, and a massive blow to their self esteem. I am not optimistic about that scenario.

*UPDATE: Eric in a comment brings up a good point:

I'd also be interested to know what the USA's debt is using those same metrics (federal debt, plus state/provincial debt, plus municipal debt, including municipal pensions, plus all liabilities of any government owned entities). China isn't the only one who hides their debt problems behind political doublespeak.

It is true we're also probably not getting the accurate story from our government in America either. All governments lie to their public, for a variety of reasons (sometimes very good ones). I have another theory I can't prove: I think if we used the same criteria to determine unemployment and inflation as was used during the great inflation we'd be pretty close to the same numbers. I can't find any proof of this but I keep reading from very reliable sources that inflation is calculated specifically excluding energy and food costs.
Posted by Christopher R Taylor at 8:40 AM

Very interesting article, thanks for sharing it. Another interesting dynamic with China is they are a nation in transition from rural to urban culture... about half of China still lives in villages of less than 2000 people. They have more farmers than we have citizens. If their economy collapses and the urban expansion stalls, it could lead to major unrest as people are trapped in the cities while the rural population that has been looking forward to a standard of living increase is told to stay on the farm.

I'd also be interested to know what the USA's debt is using those same metrics (federal debt, plus state/provincial debt, plus municipal debt, including municipal pensions, plus all liabilities of any government owned entities). China isn't the only one who hides their debt problems behind political doublespeak.