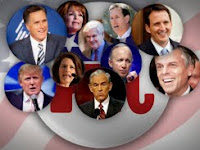 Well the primaries are a ways away, but here's my analysis of the GOP candidates so far, in alphabetical order.

Herman Cain - I like Herman Cain, I think he has the most impressive resumee aside from Gingrich, and he understands business better than the rest. I like the 9-9-9 plan even if it sounds like a pizza ad, and just having him as the nominee would detonate the "vote for Obama or you're a racist" slander. The problem is he seems very unready for the job. I don't mean his stumbling in interviews, he just seems like he isn't quite there yet and we've had enough of an unqualified dilettante in the White House to last us a lifetime. Maybe next time, or as VP. I could vote for him if he was the nominee but I would really prefer he wait 4 years and bone up on his understanding.

Newt Gingrich - I don't like Newt. He's terrific at expressing himself and teaching, he makes great speeches, and he can talk the talk like none of the rest of these guys. He's got impressive experience but almost no executive training, and he's made some seriously stupid moves in the past like pushing for government health insurance with Hillary Clinton, backing Romney's Massachusetts health plan, and promoting global warming alarmism. He's pretty low on my list of candidates because of all that; he's not much of a conservative to say the least.

Jon Huntsman - This guy is only running as a Republican because he can't as a Democrat. No way, ever.

Ron Paul - He has some great ideas in terms of fiscal structure and constitutionality, but when it comes to foreign policy, this guy goes completely off the rails and that's the key problem with Paul. He's not running for king of congress where fiscal and economic ideas are framed. He's running for president where foreign policy is most important. He's so much a crank and so opposed to everything that he'd have zero political allies and would be a lame duck from day one. And he's ancient. No.

Rick Perry - While Perry has some squish in him, he seems to be leaning conservative and has good solid executive experience. I also think he's a lot cleverer and more effective a campaigner than we've seen so far. The problem is he's fumbling and seems incompetent, and that "heartless" comment was like cutting his own throat. His border and immigration policy seems as idiotic and self destructive as President Bush the younger's was. I could vote for him, but I wouldn't like it.

Mitt Romney - He's got good debate and campaign skills, he's charismatic, he has lots of executive experience, and he's fought a hard left congress most of his career. The problem is he's not much more than a leftist himself, he's got a real problem with changing his statements to match what is most politically expedient, and I have to be honest, his Mormon background troubles me. I don't care so much about his religious beliefs, but I am worried that the Mormon church is extremely top-down and the church is throwing millions at him to help him win. If they are so gung ho on a Republican in office, why didn't they do so with previous Republican candidates? No. If he wins, Obama wins.

There are a couple others running but Santorum, Bachmann, etc have no shot so I'm not going to bother with them.

I have a shared problem with Rick Perry and Herman Cain both (and Sarah Palin, or Bachmann for that matter). They seem conservative most of the time, but when caught on something they haven't heard about before, they seem confused or unready. The problem is, I believe, that none of them are conservative because they came to this from study and understanding, but from hearing about it. Like they listened to Rush Limbaugh a lot and agreed with what they heard, but haven't learned the foundational principles and philosophy behind conservatism.

Newt Gingrich isn't very conservative, but at least he has a very strong comprehension of what that movement is about, why it came around, and what the basis of the ideas came from. Its not enough to want small government and lower taxes if you don't understand why and the significance of these positions.

The thing is, if Cain, Romney, Gingrich, or Perry won, they probably will have a GOP-controlled congress in both houses and that would help restrain their stupider ideas or faulty understanding of conservatism. Yet the biggest problems we have right now with President Obama is his constitutional misuse of the executive branch, the ocean of regulations, and the way he's using the agencies. I don't trust Romney or Gingrich to do anything about that. I suspect Perry would do little, although he's mentioned rolling things back and no one else has. I think Cain would, but only if he was carefully lead to that position.

Right now Perry is the only guy who actually has been campaigning much on what he'd do as president. And that's what I like to see and would reward.

I'm not looking forward to this election for several reasons. First, I have a sneaking suspicion that despite having horrible polling, massive dislike, and a terrible economy, President Obama will win again. Second, I just don't really like any of these candidates very much, and I don't really want to vote for any of them very much. And third, I'm pretty sure that it doesn't make a damn bit of difference who is president or in congress at this point. I think we're doing the Wiley E Coyote bit before he figures out he's running on thin air.
Posted by Christopher R Taylor at 10:17 AM

I must say I agree with you just about entirely. Must be why I read your blog!

I don't know who I'd vote for if my primary were held today.

I think Perry would be a good President, but I'm worried he won't win against Obama.

Yep, that pretty much nails my misgivings down about each of the candidates, too.