THE ART OF POLITICS AND THE SUPERCOMITTEE

"Politics is the art of the possible."
What happened with the budget "supercommittee," the group of 6 Republicans and 6 Democrats that was supposed to figure out a way to cut the debt and find a way to build a budget? Well it succeeded at what congress mostly wants: kicked the can down the road so they don't have to deal with it yet.

The problem with the budget is that the only way to do it right is to do things that are going to annoy a lot of voters. Either you have to raise taxes massively across the board, or you have to cut massively across the board, and probably even with tax increases you would have to cut. Congressmen don't like cutting, they almost never, ever do. They'll cut the rate of growth, but they almost never actually cut any spending. Reducing spending means lowering their power, and congressmen don't play that.

Republicans offered tax restructuring that would have increased taxation on most wealthy Americans (by eliminating deductions, etc). The Democrats rejected it, because the GOP required cuts in exchange, the "great compromise" idea. The Democrats demanded a trillion dollar tax hike and increased spending by 30 billion dollars, while offering token cuts (reductions in the rate of growth, again) as "compromise." The Republicans declined.

The two just couldn't meet. And they won't for the forseeable future. Democrats like President Bush Obama are claiming the entire blame is at the feet of evil Republicans. Republicans are claiming the entire blame lays at the feet of evil Democrats. The truth is, they're both to blame in a sense. The two parties are at this point so separated and divergent on how to handle the economy and spending that they cannot every meet. There's no art here, no possibility.

Its simply impossible for them to reach an agreement. So its up to the voters to decide: do we want to be Greece, or do we want to start to dig our way out of the hole? Spanish voters picked the latter. What will America do? President Obama vows to veto anything without more taxes and that includes any cuts. So that has to be part of the answer as well: a president who'll do what has to be done. Signs point toward the Spanish road, with voters rejecting Democrat tax and spending increases but we'll see.

The problem with the concept of compromise is that it presumes there's reasonable give and take to a middle ground. We're not in that situation here.

For almost a century the budget has been successively larded up with more and more spending, the bulk of it on redistributing funds from wealthy people to poor people in the form of welfare, social security, and medicare. Each time a new big program was created, it added to this budget. Then in the last ten years or so, it skyrocketed. Allow me to show you how with this graph courtesy Domenech at the Ace of Spaces HQ: 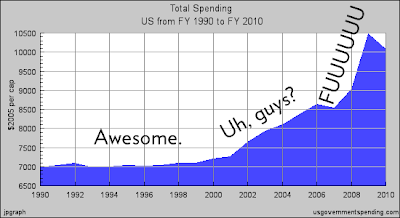 And now we're over fifteen trillion dollars in debt, more than most country's Gross National Products combined. The United States is in debt by such a gargantuan number it is difficult to visualize, let alone comprehend. And it got that way by continually spending more than it was taking in.
That means "compromise" means "do more of that and a little bit of what we need to" which is like "compromising" with a bully to stop beating you up by only using one fist. Sure, technically he gave up a little, but the problem wasn't solved, it's just getting worse at a slightly slower rate. If your purpose here is to actually solve the problem, then compromise has to be where and what is cut, not between cuts and tax increases.

But the Democrats think the problem has not been too much spending, but insufficient taxation. They all demand we go back to the tax rates of the 1990s, claiming that would fix the problem because look at how the debt was vanishing back then! The problem is, the budget was a quarter the size back then, and only started to eat away at the debt after the Contract With America Republicans forced President Clinton over repeated budget busting budget attempts to finally sign a balanced one.

The federal government has gone so totally berserk since then its impossible to argue factually that all we need is to raise taxes, or that raised taxes would even make any difference other than a slight slowdown in the accumulation of debt through interest rates.

And what will the cuts come in? We know already thanks to the Government Accountability Office that there are hundreds of billions of dollars in waste and duplication and that was just a surface audit of legislation, not practices in agencies. But who will cut there? Cuts mean losses of jobs, and as I've written about before, in a low job climate, cutting jobs will look crazy. Just like someone who knows nothing about surgery would think removing an inflamed appendix before it ruptures and kills the patient is barbaric and evil - look at all the pain you're causing! - cutting the federal government budget will look pernicious and destructive.

And as I noted in the same piece, blacks are disproportionately represented in federal government jobs, by about double the actual national percentage. Guess what people will yell if you start cutting black jobs? So who is going to have the guts to do what needs to be done, even if the nation puts Republicans in power? What basis do any of us have from history and experience to believe the GOP, once its a majority, will care about the budget or cutting?

Aside from some act of God or massive catastrophe I do not see any change of pace for America or anywhere else. The fact is, people know what has to be done, but they'll have that NIMBY attitude - cut somewhere that doesn't affect me.

And meanwhile, the party out of power, eager to regain that power, will go berserk maligning, attacking, smearing, and even inventing trash to throw at the party that tries to cut, using every political device, willing accomplice in the legacy media and entertainment industry, and dirty trick to stop what has to be done.

So we have this confluence of political sloth and greed, public greed and apathy, and lust for power that prevents doing the right thing at every turn. And with a modern culture that not only rejects but mocks virtue, ethics, hard work, and sacrifice, there's just no way out of this that ends well that I can foresee.
Posted by Christopher R Taylor at 11:13 AM

Give 'em a golden parachute. Drop say a couple million each on them, tax free. You would probably make the cost up in the relief from waste and redundancy alone, not to mention the drag on the economy too much of the gov't has.

Or just pay 'em to do nothing at all. Spike the various agencies' power to do anything, freeze hiring, and let them moulder away at full pay. Couldn't hurt!!

ed in texas
Fourth para:
"Democrats like President Bush are claiming ..."
There's a mind streching concept. I have now entered the bizzaro universe.

Whoops, thanks fixed it!