"And I think there is too much bloviating around from politicians."
-Barney Frank 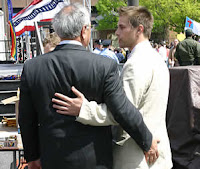 Barney Frank (D-MA), one of the most leftist, openly corrupt legislators in the US Congress, is claiming he will retire soon. Frank is openly gay, which probably protected him from ethics charges and various rules violations that would have caused other legislators problems. He's known for his reliably radical left position on topics, his virulent protection of the crumbling and incompetent Fannie/Freddie quasi-government lending agencies, and various boyfriends who keep having problems with the law.

Him being gone from congress can't happen too soon. Maybe Massachusetts can erase the humiliating blight of their horrific choices of congressmen they keep voting for over and over with someone new and not as awful as Kennedy, Murtha, and Frank.

One down, about 300 to go. Throw all the bums out, until they start listening.
Posted by Christopher R Taylor at 8:43 AM