“If Occupy Wall Street was a genuine grassroots movement genuinely outraged by the idea that banksters own the government, then they would be marching on the Obama White House.” 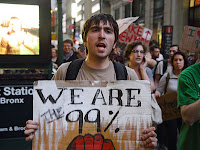 I and most others who aren't on the radical left have mocked and giggled at the "Occupy Wall Street" movement which is little more than spoiled children of all ages demanding they keep getting things for free while trashing a location and demonstrating how little they contribute to society other than jazz hands and drum circles.

That said, there are a few aspects of their complaints which I happen to agree with - as do most Americans. These are the areas of complaint that the Tea Party Movement was formed around. Both movements are unhappy with the gigantic bank bailout "too big to fail" crap of two presidential administrations and several congresses in a row. Both movements are upset at the cronyism and waste in government. Both movements dislike the way congress and the White House are so willing to corrupt themselves for big corporate interests and money.

Here are a few stories recently which the Tea Party and the Occupy Wall Street folks would agree on:
And so on. Almost every day it seems another example of big corporations and the Obama administration or congress colluding on or working out some mutually beneficial deal is revealed. Some idiotically call this crony capitalism, when it has absolutely nothing to do with capitalism at all.

The biggest differences come in terms of solutions, demands, and the perception of President Obama. The OWS folks are most likely to think of him as a great guy who has made mistakes or been mislead and will certainly vote for him again if they vote at all. They think that the problem with taxes is that there isn't enough goodies being given away and the problem with big government is that its spending its money and energy too much to help rich people instead of them.

The OWS folks don't care for the founding fathers or their ideals beyond what they can demand from the constitution in terms of treatment, like freedom of speech and assembly. They don't want us to turn back to what made America great, but instead want us to turn more heavily toward what is obliterating Europe.

But their complaints, when you get beyond the "give us free stuff so we don't have to contribute to society" and behavior, are valid and reasonable. They may be infantile, they may be destructive, they may be ignorant, but they aren't entirely wrong.

The problem here is that the OWS guys are a coalition of very diverse ideas and mindsets. They range from anti-Semites to anarchists to socialist radicals to disgruntled students to people frustrated by lack of employment to anti-war types who miss the good old days of protests and on. They can't agree on any message or narrative other than "this sucks." So just about everyone can find something to agree on - and disagree on - in the signs and statements and chants of OWS. And they decry big corporations while taking advantage of them and buying their products like good sheep.

And behind it all are the usual leftist suspects: the Democratic Party, International A.N.W.S.E.R., George Soros, SEIU, and so on. And they have virtually nothing in common with the OWS people on the street other than a deep abiding fear of Republicans in power and a basic antipathy toward the United States... while loving New York City, of course.
Posted by Christopher R Taylor at 7:40 AM