"Sensible people know that if there were no other reason, this "clash of interests" would be enough for a certainty that [this movement] has absolutely no credibility left" 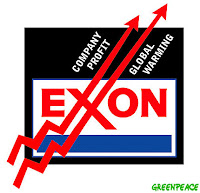 Someone recently did a close analysis of funding of global warming skeptic scientists and they found something interesting. Of the top scientists in this field, 78 of them were found to have worked directly with or were primarily funded by Exxon Mobil, a mega oil company. Of them, 23 were found to be coordinating lead authors of the main denier papers and studies. Those 23 almost exactly match name for name the climate change advisory board at Exxon Mobil.

Which brings up serious questions regarding conflict of interest. Can these scientists truly be objective working for big oil? At best this makes their work seem tainted and their associations troublesome.

Oh. Wait. I got that wrong.

Its IPCC scientists that are in question here. Donna LaFramboise at Men's News Daily writes:

Beginning in 2004 (around the time that work was beginning on the 2007 Climate Bible) the activist World Wildlife Fund (WWF) systematically began recruiting IPCC scientists. By late 2008 it says it had persuaded 130 “leading climate scientists mostly, but not exclusively from” the IPCC to join its parallel initiative called the Climate Witness Scientific Advisory Panel.
...
On this list are 23 coordinating lead authors – those the IPCC placed in charge of an entire chapter. The list also includes Osvaldo Canziani. Having served as Working Group 2 co-chair for both the 2001 and 2007 reports, he is one of the IPCC’s most senior officials.

Same numbers, same leaders in the field... but they're tied to the radical environmentalist group World Wildlife Federation, a group more or less infamous for lying and misleading about data. I've written in the past about their deception regarding polar bears, for example.

Those 23 names are almost exactly the roster of the WWF's advisory board. The IPCC's roster is basically riddled with WWF radicals, which is a plain conflict of interest. At best, this suggests the IPCC's conclusions are tainted by the WWF's agenda rather than facts and their associations are troublesome.

Its not that someone couldn't be part of the WWF and possibly be objective or do good work - any more than someone could not possibly get money from oil companies or work for them and be the same.

I apologize for the confusion, and hope this story is clear enough.
Posted by Christopher R Taylor at 8:47 AM