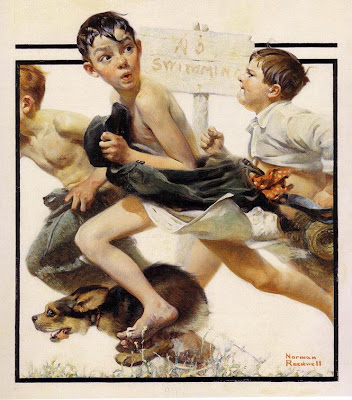 So I just caught the trailer for the new Footloose remake that is coming out this weekend, and after watching it... ugh, I feel old. The movie doesn't look that great (neither was the original at face value), but the main reason I won't be watching it is because I have a strong suspicion I'd come down on the side of the Reverend (played by Dennis Quaid) this time around. More on that in a bit.

Footloose was an iconic movie for its time. It explored the classic themes of youthful rebellion and fighting the system (often overlooked is the fact they lost the fight with City Hall and were forced to have the dance outside city limits), and those themes will always play well in American society, but beyond that the movie's release coincided with the emergence of music videos and the popularity of MTV. Millions of young moviegoers saw the parallels between what was going on in youth culture and the movie's observations about self-expression, and this resulted in the 80' generation having a deep connection to this movie. Sure the acting is atrocious and the soundtrack has not aged well, but every kid can relate to having adults forbid them from engaging in an action they perceive as harmless. That's why the movie is being remade, in fact, because the theme is a timeless one.

But let's take a closer look at what was going on in the original 80's movie vs. the remake. Footloose was, of course, anti-authoritarian in nature. By itself this is neither good nor bad (Braveheart was an anti-authoritarian movie as well). In order for an anti-authority story to be inspiring, the authority in question needs to have abused its power. So we must ask: is a law preventing public dancing an abuse of authority? (If you've ever seen me dance, you would probably consider such a law to be a public service... thanks, I'll be here all week).

One could make a good argument that the act of moving rhythmically to the sound of music is a form of expression, and even a form of communication when another person is involved, that deserves to be a protected act in the same way our freedoms of speech and religion are protected. Fining or jailing an otherwise law abiding person for the sole act of dancing in public seems like an inherently abusive and unAmerican act. In fact, when the Footloose movie (which was based on actual events) came out, many Americans were shocked to find out there were still pockets of the country where any form of public dancing, from tap dancing to the two-step, was considered a lewd and lascivious act forbidden by law. So our tendency is to be quite sympathetic to the kids who are prevented from dancing in this movie, and given the weak arguments of the authority figures (which mirrored the prevailing arguments for real anti-dancing laws) it is hard to be critical of said sympathy...

...until you see how the kids dance in the new Footloose movie. And herein lies the rub.

One of the key scenes in the original Footloose takes place at the local drive-in. Ariel, the wild and rebellious preacher's daughter, plays a cassette tape of some typical 80's dance music, cranks up the volume, and everybody at the drive in starts dancing. Some people breakdance. Some just tap their toes to the music. The short order cook really seems to get into it. You see a few couples dancing together, but mostly it is just individuals enjoying the music and moving around with it. Ariel in particular is just sort of doing something that is best described as 'swaying'. In short, there is nothing lewd going on, nothing more objectionable than some really dorky dance moves, and absolutely nothing that should cause reasonable concern for any parent. So when Reverend Shaw shows up and puts an end to all the dancing, he really does appear to be overreacting, and you have an urge to tell him to pull the stick out of his butt.

Now move forward to the same scene in the new movie. If you google the trailer, you will see a glimpse of this scene. It also appears to be in a drive-in and the set up for the scene appears to be very similar. Except when you see Ariel dancing, she is grinding her butt into her dance partner's crotch, and as he puts his hands on her hips, she pulls them forward and down towards her own crotch.

With this in mind, when Reverend Shaw shows up and sees his daughter engaged in what is essentially a fully-clad enactment of sexual intercourse, in public, it is hard to imagine what an appropriate response from him would look like. I mean, if he started busting heads with a baseball bat, I'd cut him some slack, but I'm a father and therefore biased. Still, who is going to accuse him of being uptight and needlessly worried for having a strong reaction against his teenage daughter engaging in that type of dancing?

Jack, get back, come on before we crack.

Trivia Bonus: The story that inspired the original Footloose movie is based on events that took place about 20 miles from my hometown. The town of Elmore City, OK to this day has an annual Footloose Festival where they celebrate their small claim to fame by dancing in the streets. Follow the link to read the original 1980 article in People magazine that inspired Dean Pitchford to write the screenplay. As with many such things, the true story is actually more interesting than the Hollywood version (hint: in the true story, the kids fought City Hall and won).
Posted by Eric at 9:25 AM