"they can't afford private schooling, they can't access school vouchers, and they haven't won or haven't even been able to enter a lottery for a better charter school." 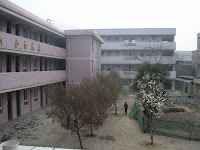 First, we have folks like Governor Perry and President Obama insisting that children of illegal immigrants must be given in-state tuition credits for colleges and universities or we're simply awful people. That the fact that these kids are themselves illegal immigrants is irrelevant, and we'd all be better off if those kids got a better education.

Second, we have the story of Ohio mother Kelley Williams-Bolar who was thrown in jail for falsifying her childrens' residence information so they could go to a better school than the one in their neighborhood. Thrown in prison.

The Ohio officials said she was stealing by putting her kids in a better school.

After spending nine days behind bars charged with grand theft, the single mother was convicted of two felony counts. Not only did this stain her spotless record, but it threatened her ability to earn the teacher's license she had been working on.

And that's not all. Instapundit reader points out:

So let me get this straight: Elizabeth Warren says the kids at the better school should pay higher taxes (as adults) because everyone contributed to funding their school, but when one of the contributors wants to send her own kids there, it’s “stealing?”

Ms. Bolar-Williams either funded that school or she didn’t. If she did, it isn’t “stealing” to send her children there. If she didn’t, then those kids at the better school wont “owe” her their taxes as adults.

There appears to be some... inconsistency here. The truth is, these schools want absolute control over where students can and cannot go, acting as if every dollar in taxes spent in one neighborhood goes into a special account that only pays for the schools in that area. If you go somewhere else, you somehow are said to have not paid for your student's education!

This is where lack of competition hurts children and parents, especially poor ones. The more poverty stricken an area is, the worse the schools tend to be and the schools are adamant about not changing that. Every effort made to allow parents to try something else is blocked by teacher's unions and government officials. Competition may not be allowed.

The left - and the two groups mentioned above (but I repeat myself) keep telling us that its a matter of funds, that these schools simply need more money. But we've poured more and more money into education and schools every year for decades and the education keeps getting worse. Hey, lets try something different, what do you say?
Posted by Christopher R Taylor at 8:36 AM