"There is always a clue. "
-Gil Grissom 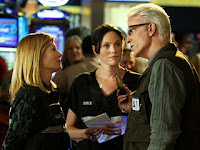 Its interesting to me how television shows go through phases. I have rarely seen any episodes of Law and Order, but I understand the Michael Moriarty early years were far better than the later ones, and for years now I've read nothing but complaints about how outrageously leftist the shows have become. Apparently their "ripped from the headlines" approach is to take every news story and use it to show how evil conservatives, white people, Christians, and businessmen are.

CSI was one of my favorite television shows, but it started to get a bit old by the time William Petersen left. Then when they replaced him with Laurence Fishburne it went downhill. The first year wasn't bad, but the show obviously meant for this total novice and beginner crime scene investigator to become the leader of the team in defiance of all logic and reason. Compounding this the promotion of Catherine Willows, a character I've never really liked, to the head of the team which absolutely would never happen in any real lab. She would have been fired long ago, come to think of it, for corruption, conflict of interest, violation of rules, and continuous violation of dress code.

The problem is, Fishburne's arrival took the show off into advocacy land, and entire shows were spent on leftist tracts, such as the last one I watched with him in it about the evils of "Fracking" and how it was killing everyone.

Fishburn's character Ray Langston was taken off the show, allegedly at Fishburne's request, and his character brutally beats, then murders a serial killer. The team falsified evidence and testimony to protect Langston.

As a result, Willows is demoted, Langston's character is removed to another city facing Internal Affairs investigation, and the team needs some replacements. So enter a new boss, Ted Danson.

Yeah, I was scratching my head at that, too. Of all the people they could have picked, Danson? But I have watched a couple of episodes, and actually it works. The show is more focused on solving interesting cases using fantasical science in CGI animation and musical montages, and Danson is doing a good job. He plays a sort of space cadet genius who seems to be continuously distracted and possibly stoned, but always is on the ball and has a very hard, ruthless edge. He seems at first like a cuddly hippie, but underneath it he's fairly pitiless and will do whatever it takes to do the job correctly, even if it means firing people. Danson himself is a bit of an idiot but he does good work here and his character is written well.

The first show Danson showed up in "73 Seconds," Willows goes off on a tirade while talking to Stokes, basically telling him that they've been playing fast and loose, breaking the rules, covering for each other, and finding ways to cut corners. This is something they never did while Grissom was around to rein them in, but when he was away, they seemed to go nuts (such as the "reverse forensics" with the excellent and underrated actor Liev Shreiber). 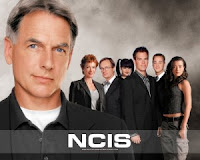 Then we come to NCIS. This rapidly became my favorite show on television, although at first I couldn't stand the overly quirky characters. One you get past the almost cartoonish Abby Sciuto and Tony DiNozzo, there's a lot of depth and fascinating characterization. And NCIS had something going for it almost nothing else on television does: a genuine love and respect for America and the US military, and old fashioned values and ethics as embodied by Mark Harmon's character Gibbs.

The show has been roaring along fine with very few missteps and many shocking, surprising turns for nine seasons now, and has become one of the most popular shows on television as a result of great writing, fascinating characters, and a unique perspective on the world in TV land.

But... they seem to be losing it. For years, NCIS was the only show on television that actually had Muslim bad guys, army good guys, and no ridiculous conspiracies in the government. However, as time has gone on, apparently the writers got tired of that and started slipping in more government evils, more odd conspiracies, and the Muslim is never the bad guy any more. One particularly obnoxious episode had a cartoonish Christian as the bad guy, and the Muslims as wonderful, loving, and decent human beings.

Its not that Christians can't be bad guys and Muslims good guys, its just that every other entertainment outlet in the world is doing that nearly every episode and NCIS was a refreshing island of difference. A recent episode with Lilly Tomlin (!?) as McGee's grandmother was especially obnoxious with computer controlled insects in the late 60s when computers were big as a living room, and a conspiracy by the government to use this plan while building it up as some catastrophic evil that no one but the writers could see as being so awful.

And what's worse, each episode is emotionally cloying. They each have been an "up close and personal" show about one character, showing them deep down in their hearts, weeping on camera or tearing their souls out and having to face some great relationship burden. In short, its manipulative, annoying, and the stuff of chick flicks. I expect Gibbs to slap someone up the back of their head and get on with work, but it just doesn't happen. The only one of these episodes that's worked so far is the one with Abby because she's such a lovable sweetheart under all the skulls and goth crap.

So CSI is on its way back up and NCIS seems to be slouching. I guess writers come and go and with them the quality rises and falls, but it is disappointing to see something you particularly enjoy fade like NCIS has been.

Also waning is CSI New York which almost lost me as a viewer with last season's insanely improbable serial killer genius who can fall 100 feet onto ocean-pounded rocks and live, then teleport into the nursery room of a cop's house in the middle of the night. The show just hasn't worked for me like it did in previous years and I've almost given up on it.

So far, Blue Bloods has been stellar and although its a bit hackneyed at times, the writing always lifts it up and every episode has been reasonable and interesting. Now if they could just get Sami Gayle to grow her hair out. Lets hope they can keep the quality up on that show.
Posted by Christopher R Taylor at 7:48 AM