YOU OWN VERY LITTLE

"You didn't have to worry that marauding bands would come and seize everything at your factory."
-Elizabeth Warren 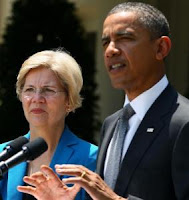 One of my long standing complaints with Thomas Jefferson is that, apparently to please his French friends, when he wrote the Declaration of Independence, he modified John Locke's brilliant triad of basic rights. Thus, we ended up with the "right" to "pursuit of happiness" which is an absurdity on its face. No one can stop you from pursuing happiness, they can't even restrain it. Even if you're tied to a spiked bed with acid dripped on your face you can pursue happiness.

Locke's original triad was life, liberty, and property which is much more important than trying to be happy. As I've explained in the past, each of the cardinal rights is sequential, they build on each other. Without life, we have nothing at all on this earth, your right to live trumps all else. Next comes liberty, for without liberty, no further rights have meaning. And then comes property.

The right to property is one of the least appreciated, most attacked fundamental rights we possess, primarily by the left. For the left, a right to property represents greed, independence from government, and oppression of those without that property. They view property as theft; you took from someone else to have what you own.

That's why President Obama, for example, focuses so much on "fairness" when he discusses economics. Fairness represents a mythical ideal where no one is taken advantage of, everyone shares equally, and all have what they need while no one has "too much." The concept of property rights destroys this concept of fairness by asserting that if I have purchased or earned something, I get to keep it no matter what anyone else lacks or how anyone feels about it.

True fairness, naturally, involves letting you keep what you earned, but that doesn't fit the left's concept. Earning things involves merit, which means that some will necessarily have more than others, while some will have less than others. For their concept of "social justice" to take place, no one can have more than others, and no one can have less. They define liberty and fairness by equality of distribution and outcome.

Recently, a Connecticut Supreme Court justice named Richard N. Palmer, who was part of the "Kelo vs New London" decision that was sent to the Supreme Court, apologized to Susette Kelo for how the decision had turned out.

Facing me, he said: "Had I known all of what you just told us, I would have voted differently."

The decision was 5-4, and without that one vote, the case would have never gotten to the Supreme Court of the US. The problem is that the judge didn't have any basic problem with the reasoning behind his decision. He thought it was perfectly proper for the state to seize property for "economic development" by a private company (i.e. tear your house down for a strip mall).

"Those comments," he wrote, "were predicated on certain facts that we did not know (and could not have known) at the time of our decision and of which I was not fully aware until your talk — namely, that the city's development plan had never materialized and, as a result, years later, the land at issue remains barren and wholly undeveloped." He later added that he could not know of those facts "because they were not yet in existence."

In other words, he would have voted against it not on the merits of the case, but on the fact that the city didn't actually follow through on the development. He didn't have any problem with violating her property rights, he just didn't care for the city doing so then not following through.

Yes, Suzette Kelo's former property is still cleared empty land. But that's not the problem with Kelo v New London. The problem is that it never should have been ruled that way to begin with. Seizing private land is not completely unacceptable but only should be done for overwhelming need and public benefit, not because a store would hire people and increase economic activity in an area.

The problem with the Kelo v New London decision was that it was done based on pragmatic benefit rather than weighed carefully against property rights. Because the very concept of property rights is being eroded so thoroughly.

In San Juan Capistrano, a family held a Bible study at their home once a week. It got to be pretty big - fifty people at a time in some meetings. The city swooped in and put a stop to this, and threatened the family with fines. Why?

Well it had nothing to do with religion, they weren't upset about a Bible Study. The problem is that the city defined this gathering as being too big for a private group. They had to get a license, pay a fee, and get permission to have those people over if that many show up. The city ordinance says that regular gatherings of more than 3 people have to obtain a special license and pay the city. That's right, your gaming group, your buddies coming over to watch football every Monday, your weekly Friday night kegger... all violations in San Juan Capistrano.

The city attorney estimates that the city is losing as much as $1000 a week by these people not getting the proper permits, and that simply cannot be allowed. Their property is not their own to do with as they see fit. They must obey the rules, and do only what the government permits them to.

Elizabeth Warren's speech about taxes, paying your "fair" share, and how nobody does anything alone is popular as of this writing. Leftists are in orgasmic glee at it and conservatives are alternating between rage and bafflement. Warren's basic argument is that since companies and businesses need roads and power and other infrastructure to exist, they shouldn't be so selfish with their money and pay more taxes because everyone benefits. In fact, she implies that everyone should get a share of their earnings because everyone pitched in.

Now, look: You built a factory and it turned into something terrific or a great idea, God bless! Keep a big hunk of it. But part of the underlying social contract is you take a hunk of that and pay forward for the next kid who comes along.

Its not that Warren is totally off base, but she's missing the fact that businesses already pay taxes to fund roads, armies, police, fire, lights, water, and so on. They are already pitching in to pay for the infrastructure (as are the employees and owners). Her principle is based not on anyone's merit or ownership, but on a fictitious responsibility to everyone else to share everything equally. She starts with a flawed presupposition about money and ownership, and then imposes that on everyone else.

She insists that businesses "pay it forward" which means to give up what someone owns for the benefit of others. If a company wants to do that, fine - I would even encourage them to strongly consider it to some degree, as a Christian. But whether they do or not is up to them, not the government. That's what property rights mean: you can do with your property whatever you choose, as long as it does not violate another person's rights in the process.

Losing this principle means losing a lot more than just owning anything. You don't go from having property to having no property, as the Marxist idiots believe. Someone always owns and controls that property, and that someone is the government, if its not you. Do you think you own your house, your car, almost anything you possess? Use it some way the government doesn't care for, miss a property tax payment, and see what happens.

Every single new regulation and ordinance that limits your freedom in how you use your property is an encroachment on your liberty. You can't smoke in your house, or outside it. You can't have too many people over. You can't grow vegetables in your front yard. You have to mow your lawn every few days. You can't water your lawn more than 1 inch a week. On and on it goes.

Some of these regulations and limits might be permissible and reasonable but they all represent limiting your free expression of property rights and always, always should be met with opposition, suspicion, and difficulty. The fight for free speech has been going on for over a century in America, trying to redefine nearly everything as "speech" and thus permissible. But the right of property has been eroded steadily until in the truest sense of the word we own very little.

Each of the cardinal rights we have - life, liberty, property, self-defense, speech, and conscience interweave and sustain each other. Without those rights being fully defended and vigorously protected, we lose all of them in time.
Posted by Christopher R Taylor at 7:34 AM

ed in texas
"Pursuit of happiness", in the 17th to 18th century context, merely means that you cannot be forced to follow your father's trade, which were generally inherited. I.e., if your pop was 'John, the cooper' (makes boxes), you couldn't be forced to follow him. You could chose your own pursuit as were open to you.
That's really all it means.

That sounds like a bit of a stretch but even if its true, its still a ludicrous replacement for "property"