"When parents gasp at the idea of their kids crossing the street, walking to school, or playing at the playground unsupervised (!), kindly remind them that this is not a mission to Mars we’re talking about, it is a mission the average 6-year-old could handle with aplomb back in 1979." 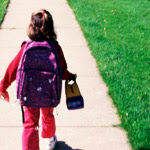 Is your kid ready for first grade? Here's a few examples of what kids were expected to be able to do in 1979 before starting first grade:
This comes from the Little Kids, Big City blog, where Christine Whitley list a full dozen requirements. They come from a book published in 1979 helping parents prepare their kids for 1st grade, and the writers suggest that if your child can say yes to 10 out of 12 of them, they're ready to go.

Now, I've not raised a child, and I don't know many but from what I've heard this is not something most parents expect their 6 year old to be ready for. "That's what preschool is for," they say. Home school parents would shrug at much of this list but consider this point:

Can he travel alone in the neighborhood (four to eight blocks) to store, school, playground, or to a friend's home?

Whitley writes about this point:

I've never let her even try! I'd probably be reported to the police if I did try!

And that's the rub, isn't it? These days, parents are terrified for a child to walk one block without supervision. Now, I used to walk half a mile to and from school by the 4th grade, but I was out in the country and it was a wonderful walk. There were birds and forests and apples to pick from nearby trees, there were farms and cats to pet and all sorts of things to think about. In a city, I'm not so sure.
The truth is, the crime rate has reduced since 1979, not gotten worse. Kids are less, not more likely to be nabbed, harmed, or abused on a little walk. I know I'd rise up in furious violence if someone hurt a little kid walking to the store, and I doubt I'm the only one.

But the police part is the critical one: Whitley is joking, but only half. Every parent lives under the threat of local government interference and legal punishment for doing something that is considered unsafe or improper with their children. Its not that some of that shouldn't happen, its that this oversight and the definition of unsafe or improper has gotten ridiculous.

Letting your kid walk alone through a neighborhood in a place some authority (or busybody calling an authority) considers unsafe could get you busted. And that's a serious, serious problem with modern society. Even more than the bubble boy phenomenon where every parent seems to have been terrified by a continuous flood of images from television and movies, the crushing oppression of governments trying to do good for people has made it more difficult for kids to be kids.

I've written about this in the past, as have many others. Lawn darts, chemistry sets, toy guns, firecrackers; the list of toys and fun that we used to have as kids has gotten shorter and shorter as well-meaning tyrants outlaw and prohibit one thing after another. Someone might get hurt.

Its one thing for mom to yell at you to stop doing something because you might put an eye out, but it is another entirely for the government to outlaw something and penalize parents for it. The principle of parental judgment and sovereignty over their family has been so eroded people are just used to it being this way.

This isn't from such a distant time in the past, either. 1979 is just over 30 years ago, its not like we're looking at McGuffey Readers from the 19th century. This isn't some distant hazy time in the past when kids had slingshots and Lone Ranger decoder rings, its just a few decades ago. I was in the 8th grade when this book was written.

How far we've fallen, so fast. We have a lot of ground to steal back folks. But there is hope: most of these extreme kid protection laws and parents terrified to let their kid walk without a leash while swathed in bubble wrap are urban parents. Out in the sticks, well kids are running around just like they always did - at least, the kids who play outside instead of on the internet or console games.
Posted by Christopher R Taylor at 9:50 AM

I am not necessarily advocating people have their six year old want 8 blocks to school, I leave it up to them.

But I have never heard of a parent being arrested for letting any school age child walk to school.

I have heard of maybe three year olds or under, wandering alone, being the cause of a parent's investigation or perhaps arrest.

I don't consider myself a worry wart parent, but I'd have reservations about letting a 6-year-old travel 4-6 blocks in town alone. At least for my daughter, she was probably around 8 before she reached a level of mindfulness where I was comfortable with that.

My concern isn't that she'd be abducted, just that she would get lost, or fail to remember my instructions to look both ways before crossing the street, or exercise poor judgment about oncoming traffic in relation to speed vs distance.

6 seems a little young to me for that one particular thing, but not incredibly so.

On the other hand, I let my 10-year-old drive my pickup truck from the hay barn to the house by herself this weekend, so I may not have the best judment (my wife certainly didn't seem to think so).