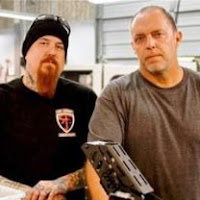 I don't own any guns. They're expensive and I don't have money for something like that. I wouldn't mind owning any, in fact I'd love to have a big armory like some British lord in a manor somewhere. And here's the pole arms room...

Guns are amazing engineering and a pretty useful tool, something people often don't consider. Louis L'Amour often wrote about this in his books: cowboys wore a gun not because they were raving mass murderers who wanted a killing device close at hand, but because it was a much of a tool for them as a lariat or their branding iron. And like all tools, they require skill to maintain and work with.

Which brings me to the Discovery Channel show Sons of Guns. This is a show about the Red Jacket Firearms company in Baton Rouge Louisiana, a place with guys who can fix and make just about any kind of weapon. They work on crazy projects like an updated gatling shotgun or a chopper-influenced machine gun, but the show's most interesting and important experience is the men who work there.

At Big Hollywood a few days ago, AWR Hawkins, wrote about this show and he focused on the boss and owner of Red Jacket, Will Hayden:

Will talked of how war tests not just our soldiers, but the weapons they use as well. And with the AK-47 sniper rifle, he said: “At a thousand yards every time, I’ll sit on my mountain top and knock [the enemy’s] earlobes off.”

Folks, as you watch Will’s work ethic and see how he thinks, and listen to him talk in an accent that no one will ever confuse with a New Yorker or a Chicagoan, it doesn’t take long to figure out he’s the real deal. And when you hear how our troops are always on his mind or you see the episode where he hosted WWII Veterans at his gun range, it becomes easy to give him the greatest compliment of all – real American.

When the Discovery Channel decided to tap into America’s love for guns with this program, I don’t know if they fully knew that a gift they were giving us in Will Hayden. But almost everyone to whom I’ve spoken tells me they either watch the show every chance they get or they DVR it so they never miss an episode.

And that's all true, of course, but that's not what primarily attracts me to the show. In addition to my general respect and admiration of craftsmen doing their work well, Sons of Guns has a southern rural feel that you simply don't see in television or popular culture these days.

Sons of Guns is basically the anti-Jersey Shore. Its about real, hard working American men doing good work as a team. Will Hayden is a big, burly guy about my age who clearly has a lot of experience and wisdom. In a way he reminds me of my dad, but I kind of get the impression he reminds everyone of their dad. Its not that he's perfectly wise and just, sometimes he flies off the handle and makes bad decisions. Its that he's honorable and trustworthy and a born leader.

And the respect he gets from his workers is a beautiful thing to behold. When Hayden speaks, his guys say "sir" to him. They treat the women with respect, they are respectful and honorable to their customers, they rip on each other like guys do, but always with affection. There's no American Chopper style infighting and drama here. The drama comes from deadlines and hard work.

And that's so wonderful to become a part of. These guys feel incredibly genuine and natural, they are good old southern guys, the kind of southern that Hollywood and New York has no clue about. These men are men you'd trust with your life and your family, the kind of men who built this country and sometimes it feels like are all extinct. I love this show and recommend it to everyone, everywhere, even if you don't like guns.

The one flaw? Hayden's daughter is this semi-goth girl with the kind of voice I can't stand who isn't a southern belle in any sense of the word. She wouldn't have to change much to fit on Jersey Shore, and I feel for dad in this case. That and the haircuts these guys have, what the hell happened to young people?
Posted by Christopher R Taylor at 10:14 AM