"He has to desperately hang onto this sort of racist crapola, or he will be admitting that he is, and has been his whole life, nothing but a fraud." 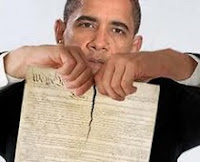 Every once in a while someone on the left will let slip things that they usually will kept tucked away between friends. For a year or two now, the US Constitution and its importance has been growing in public awareness and the political landscape. Although conservatives have long been arguing this, it was only until the Health Insurance debate of 2009-2010 that people really started to ask again "exactly where in the constitution are you allowed to do this?"

Videos showing major supporters of the Democrat plan unable to even attempt to defend the constitutionality of the bill really hit home with a lot of voters. And as a result, a lot of Democrats and leftists started to begrudge the idea of the constitution and the need to follow it. We have a president who famously proclaimed the constitution flawed because it doesn't have anything about social justice (aka leftist ideology) in it.

And most recently, Jesse Jackson sat on a stage and proclaimed one of the most important liberty-protecting parts of the constitution the "slave amendment." As I've written about before, the Congressional Black Caucus (CBC) is really hammering the Tea Party lately, saying some of the most outrageous slanders and deliberate, calculated lies about the movement; I'll get into why in a moment.

The CBC tried really hard in 2010 to portray the Tea Party Movement as racist, even inventing blatant lies about name-calling and spitting which were dutifully reported but not examined by the legacy media. Brietbart and other sites demolished the myth but guys like Alan Colmes are still clinging to the myth like a child to a security blanket. Whether its true or not doesn't matter to them; it ought to be true in their minds.

So at a CBC Town Hall recently, Jesse Jackson said "This is the Fort Sumpter Tea Party, as distinguished from the Boston Tea Party." Now, personally I don't recall the tea being tossed out of a boat, or any tea party at all at Fort Sumpter in any point of American history, so why is he saying this? Well, in a rambling, stumbling and sometimes apparently random statement, he tried to draw a parallel between the Tea Party Movement and the Civil War, which started 150 years ago this year.

"This is in the lineage of Jeff Davis, of Robert E Lee," Jackson said, "They want to undermine the 13th, 14th, 15th amendment. This is very serious my friends."

Then he said what I was referring to above about the US Constitution: "they had a debate an hour two weeks ago and all of them were for the tenth amendment... that's the slave amendment."

Now, in order to understand what bizarre chain of thought brought him to this point, you have to realize what a really loopy leftist like Jesse Jackson thinks about anyone who dares disagree with him politically.
First off, he's characterizing the Republican Party candidates as the Tea Party Movement, and using the two groups interchangeably. That's not only a useful rhetorical device to confuse listeners, he probably sees them as being such, since the Tea Party has been saying and calling for a lot of the same things that many of the new Republican Party candidates are now saying in response.

Any time any conservative starts talking about small government and state's rights, the hard left immediately yells racism and slavery, because they have a demented notion that this is secret code aimed at southern whites who they all know are the most racist people on earth, because they saw it on TV. So when Jesse Jackson hears someone say that we need to rein in government because its violating the constitution, that's what he thinks of immediately.

This is a rhetorical device called "poisoning the well," its an attempt to bias listeners against something before they examine or hear it, to portray it in the worst possible light. Jackson wants blacks to think "slavery, civil war, loss of rights" when they think "Tea Party." The Alinskyite Rules for Radicals system uses this technique a lot.

And you can see the hostility to the US Constitution in the process. Its inevitable. For "progressivism" to succeed, it has to trample on the constitution, it has to ignore huge sections of the document and rip it to shreds, because what they want to accomplish violates the document in several very fundamental ways. The entire concept of the US Constitution is that government gains a small amount of limited, specific, enumerated powers from the people and no more. The leftist concept is that government starts out with power and lets people have a small amount of specific, enumerated liberties, and no more.

Leftist ideology is necessarily and inevitably hostile to the US Constitution, and they've made that clear in the past. This is why leftist judges and legal academics keep trying to say the constitution is "living" and has to change with society's whims, rather than be a static, fixed document with flexibility built in for the world's changes.

Gateway Pundit has the video of Jackson's statements, which seem to be just off the cuff, stream of consciousness stuff and I wonder what everyone listening was even thinking when they heard it.

Here's a transcript of the video, as best I could manage. The video shifts time several spots, possibly due to questions or interruptions, or just to get past more random gibberish from Jesse Jackson. I typed what he said, although part of it was just not in any actual language. For someone famous for his amazing speaking ability Jackson was just not easy to follow here

Don't underestimate this group and just call them "tea party." This is the "Fort Sumpter Tea Party," as distinguished from the Boston Tea Party.

(unintelligable, something about Boston) led a revolution against the corrupt occupying force of Britain. This is in the lineage of Jeff Davis, of Robert E Lee. This is the states rights party, this is not a whole... some of them are drinkin' tea, some are riding elephants. They're all about the same deal and they are... its like we're on the great Titanic. Their first obsession is to destroy the captain of the ship. If he said "jobs" they said "no jobs." The first deal is destroy the captain. They want to protect those on the deck. But more and more of us are in the hull of that ship.

And I would urge you tonight my friends to know that this the 150th anniversary of the Civil War. The states rights group, they intend to take back the government and then take it back once... I would urge us don't reduce this just to so-called small groups, this is a struggle, this is a civil war struggle. Are you with the union or are you with the states righters?
And in uh, what they're trying to and and what they've been arguing - they had the debate... let this go madame uh brother chance... is that they had a debate an hour two weeks ago and all of them were for the tenth amendment.
Fred (unintelligble) the New York Times yesterday, the leaders for this, that's the Slave Amendment. They want to undermine the 13th, 14th, 15th amendment. This is very serious my friends.

...gathered around that capitol we said we ain't goin back. Surround.. they go, they go to Washington surround the capitol, demand jobs, demand the vote, protect it, now, mass march on Washington for jobs, and justice, now.

I think he was calling for another big march on Washington DC at the end there but it was a bit confused, was he referring to the Martin Luther King jr march or is he saying it should happen again? Its not real clear even in context.

The problem for Democrats in America and leftist leaders like Jesse Jackson is that blacks are doing miserably under President Obama. Things have gotten significantly worse, unemployment is near 30% for blacks in America and much worse for some sectors like young people. The CBC and President Obama are worried that blacks will turn away from Democrats, hear the message of the small government tea party and find something they like.

So they're fighting back by trying to portray the movement as a bunch of slavers and racists, in the worst possible sort of lies. The only way they think they can fight the momentum of the Tea Party, to stop people from gaining greater constitutional awareness, and from noticing who's to blame for their misery, particularly blacks, is to lie, slander, and shower hatred on their enemies.

The truth is, they can't convince, persuade, and argue that they're right and people should work with them. They don't have the facts or the truth to help them out. All they can do is attack and manipulate, to lie and trick people. And for almost 40 years, its worked with blacks across America. Will this work again?

I would love to believe that things are changing. I'd like to think that with the internet, blacks are able to get information for themselves that challenge what they've been told for decades by leftist liars and slanderous politicians. I'd love to believe that pastors of black churches like Reverend Wright don't have the power to lie to and terrify their congregations any longer with blatantly political speeches disguised as sermons. That blacks can find new sources of information, question what they've been told, and learn the truth.

I just don't have much confidence, and until this generation passes on, I don't see any real changes happening. But you can see how the left thinks about the US Constitution any time it gets in their way, and every America, of any ethnic background, should be very uncomfortable with that, to say the least.
Posted by Christopher R Taylor at 8:00 AM