RUNNING FOR ANOTHER JOB 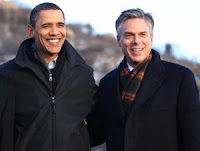 Presidential Candidate Jon Huntsman probably would have run as a Democrat, but the president is running for reelection, so he couldn't. Still, he's trying really hard to sound Republican these days. For instance, he's proposed a new tax plan that eliminates all deductions and simplifies the code to straight rates, lowering the top end slightly. The plan would also reduce corporate income tax levels (since there are no deductions) and eliminate the Alternative Minimum Tax rate which basically is extra tax on wealthy people. Finally the plan would eliminate the dividend and capital gains taxes entirely.

Sounds great right? The problem is, he's running for president, not king of congress. He can't compel congress to pass bills as president, all he can do is ask and hope they go along. I'm fine with the plan, I just don't care for people running for one job by telling everyone what they'd do in a different one. These guys are like someone applying for a job at the post office by telling their potential employer all they'd do as an airplane engineer. That's great, but what about the job you're actually seeking?

Huntsman has no chance. Zero. He's pretty well disliked by just about every Republican voter in the country because he's basically a Democrat and a buddy of President Obama. As Mother Jones notes, hes a "Democrat's Republican" Still, this kind of thing actually adds something useful to the process, because if they're smart, other GOP candidates will follow suit with their own ideas.

He doubled down, then, by claiming he'd "repeal" the Government Health Insurance Takeover Act, again something only congress can do. To be fair, Huntsman did actually mention something he'd do as president:

He’d also repeal a Bush-era regulatory mistake, the Sarbanes-Oxley accounting rules, which have added millions of dollars of costs to businesses with little positive effect.

Mr. Huntsman says he’d also bring to heel the hyper-regulators at the Environmental Protection Agency, Food and Drug Administration and the National Labor Relations Board, all of which are suppressing job-creation.

The truth is, if Huntsman was elected, mind controlled congress, and accomplished all this, it would be a huge boon for business and investment, which would kickstart the economy significantly. Which is why as I said a few days ago, the Republican candidates should all be running on this sort of platform.

If nothing else, this kind of language probably will help him get lots of tasty donations from businesses. And Huntsman does seem to understand business, even if he's a bit sketchy on the rest of his positions. He's the sort of Democrat I could vote for, if he ran against someone like McCain or Obama.
Posted by Christopher R Taylor at 8:59 AM