"Republicans could fairly use the Solyndra flap to highlight Obama's corporatism -- if only they weren't guilty of the same sort of thing." 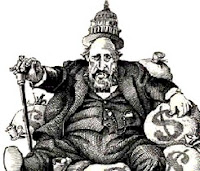 In all the furor about Solyndra's apparent influence corruption and the waste of funds on a plainly failing business with no future, Solyndra has become an area of fixation for Republicans hoping it helps push Democrats down further in the polls. I think its a bad scandal, but not as bad as the Gunwalker one which ended up with dead people. But there's a side to this most folks aren't looking at, something Timothy Carney wrote about over the weekend at the Washington Examiner:

But many Republicans are drawing narrower conclusions, making Solyndra about one loan, or trying to imply -- with insufficient evidence -- that it was a corrupt backroom deal. One reason they're not looking at the issue more broadly is that it would draw attention to the corporate subsidies Republicans love.

The most telling moment of last week's House subcommittee hearing on Solyndra was a back-and-forth between Democrat Ed Markey and Republican Phil Gingrey.

The implication was clear: Federal subsidies to big, established companies are fine. It's the handouts to these upstarts that are objectionable.

See, the problem with Solyndra wasn't that it was a small failed company, its that it was spending we shouldn't be involved in. Being small, unproven, and struggling is a far better reason for assistance than being huge, established and proven - if the federal government sending money to private companies is constitutional and proper to begin with.

In other words, if it was even remotely legal in the US Constitution for congress to tax people and send that money to some company to help prop it up, Solyndra is a more reasonable target than Southern Company.

But its not. The US Constitution does not permit congress to send money to a private company to help it stay open, period. The company can be big, small, experimental, proven, it doesn't matter; no tax dollars should go there.

The fact that Solyndra is exhibit A of the failure of the stimulus and a perfect example of the infantile "Green technology" theory of economic stimulation pales in comparison to the US government deliberately violating the constitution on a daily basis.

The problem with the Republican Party is that they view the Solyndra event as leverage to gain power, as a golden opportunity rather than opposing it on principle. The idea of sending public funds to some private company is perfectly fine with them, its just this is politically useful and until the GOP demonstrates they understand there's a basic problem with doing this with any company... they've not learned the lessons we hoped to teach them in 2006 and 2008.

So far, the only presidential candidates that seem to comprehend this are the ones that have zero chance of winning.
Posted by Christopher R Taylor at 7:35 AM

Another problem with the Republican Party on this issue is they have created the meme, among conservatives, that there is a substantial difference between giving a corporation public money vs. giving it subsidies via tax cuts. While the tax cuts may be more Constitutional than the cash giveaways, the end effect is the same: the government picks winners and losers, hurts competition, and disrupts the primary ability of the marketplace to efficiently assign proper value to goods and services.

I've had this conversation with many conservative friends, especially local ones who are involved in the oil industry, and they just simply don't understand how I can support doing away with their industry's tax subsidies and not consider myself to be a liberal.

I agree, to a degree. Tax Cuts aren't so much a subsidy (money you don't take isn't the same thing as taking money then redistributing it to a company), but I am in general opposed to the principle because the purposes of taxes are not to control or encourage behavior but to fund the proper function of government.

And I agree that the federal government has no place in the market encouraging one business over another unless in cases of genuine harm (fraud, for example).