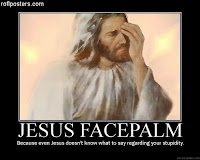 Its true that we're living in a post-Christian nation, where the influence and presumption of a Judeo-Christian worldview has come to an end. And its also true that while we try to practice religious plurality and tolerance in the United States, ultimately one faith always dominates, because it is impossible to be totally neutral or balanced. So now, the dominant worldview and faith is a secularist, naturalist viewpoint where there is no supernatural, there is no God, and what we can sense, measure, and test is all that is real.

When that worldview faces competition, its proponents tend to react poorly, especially when they combine it with basic ignorance. Faced with competition and a religion they despise, the naturalist secular left is going crazy attacking Republican candidates. Byron York outlines a few of these attacks in the Washington Examiner:

For example, the Daily Beast/Newsweek recently published an article titled "A Christian Plot for Domination?" claiming that Perry and Bachmann are "deeply associated with a theocratic strain of Christian fundamentalism" known as Dominionism. A widely discussed article in the Texas Observer claimed that Dominionists -- a "little-known movement of radical Christians" -- are readying an "army of God" to "commandeer civilian government," with Perry the "vessel" for their ambitions. Finally, the New Yorker published a long article claiming that Bachmann believes "Christians, and Christians alone, are Biblically mandated to occupy all secular institutions until Christ returns."

Surveying those articles, the executive editor of the New York Times, Bill Keller, concludes that "an unusually large number" of Republican candidates "belong to churches that are mysterious or suspect to many Americans." Perry and Bachmann, in particular, are connected to "fervid subsets of evangelical Christianity," which Keller says "has raised concerns about their respect for the separation of church and state, not to mention the separation of fact and fiction." Fearing that Perry or Bachmann could be a "Trojan horse" for a religious takeover of the government, Keller advocates strict questioning of candidates on doctrinal issues.
...
Meanwhile, with the economy still tanking, some liberal commentators have worked themselves into a virtual panic over religion. On Wednesday alone, one Washington Post columnist declared flatly that "Rick Perry is a theocrat," while another discussed the urgent task of "saving America from Rick Perry."

So we get articles like Bill Keller's in the New York Times demanding a religious test be taken by Republican candidates (in direct violation of over two centuries of US tradition and the US Constitution). He never called for any such test of, say, candidates Obama and Clinton, both of whom claim to be church-going Christians and Bible readers, of course. Only Republicans.
When reading these sorts of attacks, Christians tend to giggle and look at each other like someone just claimed the world is made of chicken waddles and circles around a giant Dairy Queen in space that we can order tablets of Sumerian poetry from. Its just lunacy.

Yet the left really takes this seriously, this isn't just some base-building nonsense or attack meant to pull in moderate voters by scaring them (there is some of that, but not much, I believe). They really do not understand faith, religion, and Christianity, and freak out when someone is openly, comfortably, and genuinely Christian. They are trying to convince people of what they believe: Republicans are too scary to elect.

Byron York says that the left is painting this as a religious war, but the fact is it is a religious war. This is a battle between the dominant religion of the left and the religion that most Republican Party candidates claim to hold. This clash is played out every day in the media, with the GOP candidates not attacking and the left firing both barrels every possible chance.

The popular culture has tilted so far toward the new dominant religion that even stating that evolutionary theory has "a few holes" as Governor Perry did recently - a fact any biologist will readily agree to - labels him as a crazy anti-science extremist.

And with the economy doing as badly as it is, the president as unpopular as he is, and the popularity and political momentum of the Tea Party what it is, the left has few choices in their drive for continued power, so this is one possible winning tactic: make the Republicans seem so crazy no one wants to vote for them.

Their problem is that while the worldview of American popular and academi culture is anti-Christian, the bulk of America, by a very large margin, claims to be Christian still. And outside big cities, most of the country is not particularly concerned about someone who claims to believe in God. In essence, the left has declared war on the 75 plus percent of the country who claims to be Christian, and I can't see that as winning perspective, but it does demonstrate how out of touch they are.
Posted by Christopher R Taylor at 9:18 AM