"I will accept no such qualifications to my principle: if I am the owner of something, I get to decide what I shall do with my property!"
Libertarians have been passing this cartoon around for a few months now: 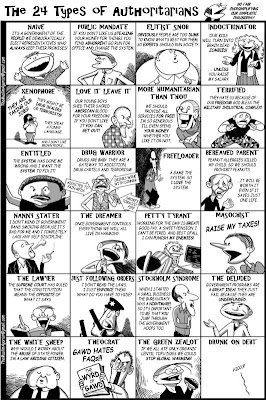 It depicts 24 different kinds of people they describe as "authoritarians." Many of them you'd recognize, such as the "More Humanitarian Than Thou" who wants to give every service for free, using everyone elses' money, the "Elitist Snob" who believes only experts are able to handle power, and "The Dreamer" (based on John Lennon's song) who believes in a leftist utopia if only the right thinking people are given enough power in government. These are all deliberately oversimplified for maximum satiric and snark effect.

However, not all of these are about government, which brings me to a key point about Libertarians. If you ask someone in the Libertarian Party (or who would be one, if the party wasn't such a mess), they'll claim they only want the government off their backs; that they oppose laws and government tyranny for maximum personal liberty.

However, that's not precisely true. If the government was shrunk down to the size and minimal impact Libertarians desire (to whatever degree each individual chooses; which varies widely), they'd still complain about their lack of liberty and tyrants around them. Because the philosophy of Libertarianism is not built on freedom from government or a philosophy like the founding fathers, but freedom from any restrictions from any source.

Let me explain. Let's say the government is restricted to shuffling papers and building roads. Now the Libertarian is free from its shackles to live how they please! Except that preacher down the road has a sign condemning certain sexual activities, that teacher thinks kids should learn how to be good citizens, that neighbor condemns the meth lab in your back yard, and your aunt thinks you should be more patriotic, and dad keeps nagging at you to get a job and move out.

Now look at that 24 "authoritarians" chart again. "Love it or leave it" is declared authoritarian for daring to suggest you should be grateful for the sacrifice others have given for the freedom you enjoy. How tyrannical! "The Theocrat" believes some things are forbidden by his religion. How oppressive!

Neither of these are government issues. They're just people with opinions that might, if taken to an extreme by some, become something the government acts upon. Until that point, all they are is a differing opinion which makes the Libertarian uncomfortable.
The problem with most Libertarians I've known is that their basic, starting presupposition is that authority is bad or unfair. Not unreasonable authority, no unjust authority, but any authority. Anything or anyone in a position that they have to obey or face consequences. Parents, teachers, older siblings, cops; anyone.

This attitude is one of personal rebellion, not a philosophy of liberty; Libertarianism merely gives easiest expression to this idea, and allows the person to hold a noble-seeming set of ideas about small government, liberty, and personal freedom.

There are a lot of libertarians who don't follow this mold, but most of them are not actually Libertarian, as in members of the party or major fans of it. These are people who, like myself, believe that we're living in a society with a near-dictatorship of federal government power that's strangling innovation, freedom, and the future of the nation. These are people who want to see the government reduced to its minimum proper role, leaving the maximum liberty to the people where the founding fathers saw it needed to be.

The problem with the big "L" anti-authoritarian liberarian is that we need authority to have any society or civilization. While I don't care to be told what to do by someone in power, sometimes I need to be. Consider traffic laws a moment.

Traffic laws are some of the very few examples in the legal world which are not based on a moral code. There's nothing immoral about driving faster than 25 in a residential zone or stopping at a red light. If everyone was cautious, respectful, skilled, and always alert and ready, we would not need any traffic laws. However, these laws create a more orderly, effective stream of traffic on the roads. You personally may be able to drive faster around that corner, but the average person cannot - and you won't be able to every single time either, as sometimes you're tired, or sick, or distracted.

Without traffic laws, the roads would be deadly, and the most aggressive and fearless (or at least those driving the cheapest cars) would not only dominate, but significantly threaten every other driver on the road. The system we have now with red lights and lines on the road and speed limits is an attempt to create the maximum safety combined with the greatest efficiency at moving automobiles from place to place.

Those rules help us, they build an orderly, safe place to drive. They allow you to get from one point to another with a minimum of wrecks, blocked off traffic, and danger. Anti-authoritarians would demand we eliminate these laws and rules in the name of "liberty" but instead what they would create is a situation where liberty cannot flourish because the worst people would oppress everyone else with their aggressive, dangerous actions.

To a certain degree, authority and thus law creates liberty, a theme I've written about in the past:

This sounds paradoxical but it is quite simple and obvious if you consider it a moment. If everyone is free to do anything whatsoever they wish at any time, then I'm free to kill you, or take your money. I'm free to defraud you, drive through your living room, take your wife. I'm free just as you are, and if you're not as strong as me, well too bad for you. Restrictions on behavior - both moral and legal - are what protect our rights.

Without laws to protect our rights, we lose the free expression of them. Restrictions are what defines liberty, not the lack of them.

However, there is a natural limit to this equasion. Too much authority and law, and you begin to lose liberty. Its like a Laffer Curve of freedom:

Up to a certain point, law increases liberty by protecting from the bad in our society. After a certain point, laws begin robbing us of liberty, because the government becomes the bad in our society. Thus, the more laws and the more government a nation has, the less free it becomes; but at the same time the less of each the less free it becomes as well; a nation without law or authority is no nation at all.

Now, how much law takes us to what point is a matter of some debate, much like with taxes and the real Laffer Curve, and its probably much less smooth than that image depicts. The founding fathers argued that very minimal authority was required, in order to deliver the maximum liberty. For them, after a lifetime of tyranny and oppression and thousands of generations before them in the same condition, the troubles and uncertainty of liberty were well worth the lack of tyranny.

That's what led Thomas Jefferson to argue "It is better for one hundred guilty men to go free than one innocent man to go to jail." For them, the high price of maintaining liberty and its requirements of personal responsibility, integrity, and virtue were well worth the benefits. They knew how rapacious a monster government was and how given just a hair's breadth of license, it would chew up the whole head.

Yet at the same time, they knew authority had to exist, and the desire to be left utterly without any disagreement or ideas which counter what you enjoy and prefer to do would lead not just to chaos, but to tyranny of the strongest and least virtuous. It takes the structures of civilization and authority in order to create liberty, let alone maintain it. And the founding fathers were first in line to say that each person must be allowed to have their ideas, conscience, and faith without interference, even if what they say is something you don't care for.

As J.N. Moody, Chaplain of the USS Yorktown said,

"It (freedom) means nothing of itself. One can be free to be a Nazi, to torture prisoners in Manila, to oppress others freedom is good, only when directed toward some good. We want to be free that we might freely serve God, and so benefit ourselves and our fellowmen. This alone can make freedom worth fighting for."

Liberty means nothing if all it consists of is your personal pleasure and comfort. That's not liberty, its the infantile scream of the tantrum. And ultimately, that's what the anti-authoritarian Libertarian is; someone who never grew up past the childish demand everyone just let them do anything they want, any time they want, without any show of disagreement or condemnation.
Posted by Christopher R Taylor at 8:05 AM

While I think you make some great points, I'm not sure how many libertarians they apply to, even among the ones who belong to the Libertarian party. You are essentially describing anarchists on the very tail end of the libertarian ideology spectrum. Those people certainly exist, but I'm not sure they are representative of "libertarians" any more than the people who want to outlaw sodomy are representative of "social conservatives". I think you'll find most 'Big L' and 'small l' libertarians in agreement with the idea that authority is necessary to prevent people from doing direct harm to eachother (theft, murder, rape, etc...). Now that is admittedly a much smaller sphere of influence for government than what liberals or conservatives generally call for, but it isn't wholly anti-authority.

You are correct though that it all eventually boils down to the social contract. The anarchists are wrong when they say we can live in a world without rules because, as Thomas Hobbes so eloquently proved, in such a world every man lives in a constant state of war with every other man. In order to live together, we must agree to set aside some of our natural liberties, and form a government that has the authority to enforce the agreement... libertarians simply disagree with most other ideologies on how many liberties must necesarilly be given up in order for society to function. While the ideology certainly appeals to many people of an anti-authority nature, the philosophical underpinnings of libertarianism are not inherently anti-authority.