"A great chef is an artist that I truly respect."
-Robert Stack 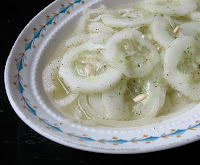 By now anyone with a vegetable garden has too many cucumbers, tomatoes and so on in the house. You can give them away, can them, and so on, but here are a couple recipes you can make with cucumbers, and they're quick and easy.

Cucumber Vinegar salad
This one requires a bit of time to marinate, but its bottomless; you can keep adding ingredients as long as you want. I think the origin is Scandinavian or Russian, its the kind of thing they'd make. The ingredients are simple:

The proportions are up to you, depending on how much you have. peel and slice the cucumbers fairly thick, about a quarter to third of an inch. Peel and slice the onion the same way. You'll want about an equal mass of cucumber and onion, overall. Dump them into a dish you can close and seal. Pour 2 parts water for each 1 part vinegar until the cucumbers and onions begin to float. Salt and pepper liberally, at least a teaspoon of each.

Chill for a day at least for best effect. The vinegar will soak into the cucumbers and onions, flavoring them slightly (a mild pickled effect) and they'll taste great. You can add more onions and cucumbers into the vinegar, but taste it every batch, if its getting too mild add a bit more vinegar.

You can mince this stuff up and add it to tuna salad or scrambled eggs, add it to salads or sandwiches, and so on. Some variants of this include sugar: don't. You can, however, add herbs such as dill, rosemary, and so on to the mix for variations but the basic plain version is plenty good on its own.

Cucumber Tomato Salad
This one is even easier. There are only four ingredients:

Again, its up to you how much to make. Peel and chop the cucumbers up into rough cubes, at leats half inch across. Chop up the tomatoes the same way; keep all the juice of both. Add mayo to the mix, just enough to coat the ingredients. Salt for flavor.

The juice of the cucumbers and tomatoes will thin the mayo into a dressing and make the whole into a delicious salad. Serve immediately or store. This stuff takes about 5 minutes to whip up and is a great, cool-tasting salad for any meal.

Make this kind of thing and people will figure you're a great cook without realizing how easy it is to do. But then, most cooking is pretty easy, its just a matter of learning the recipes.

Incidentally you might be tempted to leave salt out of recipes for your heart and blood pressure, and so on: don't. Not only has recent research basically proved salt isn't harmful unless in ridiculous quantities, but its a powerful flavor enhancing agent that just makes things taste more delicious.

This is part of the Real Men Cook series.
Posted by Christopher R Taylor at 10:21 AM