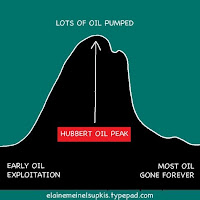 Several times now I've written about "Peak Oil" and the cries that we're running out. Each time I've shown how much new oil keeps being discovered, the amount of oil we know of but aren't taking advantage of yet (like shale oil) and how much is out there. I've mentioned the abiotic theory of oil production which suggests that oil is a naturally replenishing material rather than a static, limited supply.

And typically I get comments about how I'm all wrong (and dumb) and we're doomed. The problem is, I'm not seeing convincing arguments that this is true, and plenty that show we do have plenty of oil. Don't get me wrong, I'd prefer we found a new energy source, but there's no significant evidence that we'll need to. Mostly the argument comes down to "oil comes from billion year old plant matter which is a limited supply, and we're using up more and more."

Its not that this argument is nonsense or isn't compelling in a way, it just isn't based on any data, just observation and guesswork. Its the same kind of argument an older lady kept telling me in the face of all scientific fact that we must be warming up the planet because look at all that asphalt out there.

At the Wall Street Journal, Daniel Yergen looked at the history of Peak Oil fears:

This is actually the fifth time in modern history that we've seen widespread fear that the world was running out of oil. The first was in the 1880s, when production was concentrated in Pennsylvania and it was said that no oil would be found west of the Mississippi. Then oil was found in Texas and Oklahoma. Similar fears emerged after the two world wars. And in the 1970s, it was said that the world was going to fall off the "oil mountain." But since 1978, world oil output has increased by 30%.

Just in the years 2007 to 2009, for every barrel of oil produced in the world, 1.6 barrels of new reserves were added. And other developments—from more efficient cars and advances in batteries, to shale gas and wind power—have provided reasons for greater confidence in our energy resiliency. Yet the fear of peak oil maintains its powerful grip.

In my lifetime I've survived the end of oil as predicted in the 1970s (by 1990, they claimed). Peak Oil fears have a lot in common with overpopulation fears. The same basic flaws are found in their arguments, such as the failure to take into account advances in technology and an insufficient estimation of the planet's size.

Take a look at this graph: 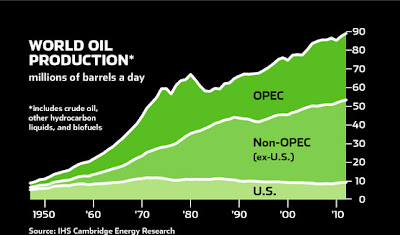 Peak Oil advocates claim that the new discoveries of oil fields is slowly diminishing, we're finding fewer in the same amount of time. Yet that hasn't held true in recent years, and the finds have been gargantuan. And, as Yergin points out, most of the new discoveries in the last few decades have been in ways to get oil previously inaccessible out of old fields.

The truth is the greatest threat to oil production isn't diminishing supply, but increasing restriction on accessing that supply. As global warming hysteria afflicts governments, they are less and less likely to access the oil that is available out of fears of cooking the planet. And while in the 1970s the "green" movement was small and smelly, now they're gaining power in governments around the world.

The more power these activists get, the less likely it is that oil reserves and new discoveries will be taken advantage of for a host of reasons. It supposedly threatens an obscure creature, harvesting the oil produces too many emissions, the oil is under a wetlands habitat, the oil piles disrupt ecology, on and on it goes. Its like someone who has piles of cash in his house but keeps finding excuses why he can't go pick any up.

Peak Oil is, for the present, just not a problem, and doesn't look to be one in the near future. Its possible - even likely - that prices will go up on oil, but the production need not diminish due to a lack of supply. We've just got to be willing to go get it.
Posted by Christopher R Taylor at 8:08 AM