"I've talked this over with my colleague who heads up our LR section and she doesn't understand it either."

When GM and Chrysler turned to the Obama administration for a bailout, they found a president eager to help out. He did so primarily because unless the government stepped in, the businesses would have to go to bankruptcy court, which would force the United Auto Workers (UAW) to renegotiate contracts without any leverage or strike capabilities.

In the end, both companies got gigantic bailouts, are still struggling in business (in no small part because the bailouts enraged the public), and GM ended up being partly owned by the US government. However, part of that deal also gave the UAW 17.5% of GM shares, and 55% of Chrysler.

The legality of this seems exceptionally dubious, but when you control both the justice department and the labor department, who's going to bring up legal challenges?

So now we find out that the UAW "negotiated" with GM for a new deal:

The deal, which was reached late Friday, also includes a $2- to $3-per-hour pay raise for entry-level workers over the life of the contract and guarantees more union jobs, the people said.

Chrysler will rubber stamp this, since the union controls the company.

Now, there's a basic principle in negotiations and lawmaking which presupposes that the people involved are honest and up front about their loyalties and interests, that they are who they represent themselves to be. This principle is called "good faith" and it shows that you're actually working for what you seem to be. If you have a "conflict of interest" it means that you are engaging in an activity for someone while having an interest in the other party's outcome as well.

But there's more. Now the contract deal goes to Ford Motor Company, who the UAW does not own. Ford is a competitor with GM and Chrysler, who the UAW do have ownership in. In other words, Ford Motor Company is going to negotiate with the UAW who controls their competition. To put it simply, Ford is negotiating with their competition on a labor deal with their own workers.
Again, in what possible universe is this legal and reasonable? Not only could, for example, the UAW focus on Ford for work stoppages, strikes, and problems, but the government also owns a large piece of GM, and could lean on Ford as a competitor to their car company.

This is simply unacceptable at nearly all levels, legally, ethically, logically, even economically.

For the unions of course, this is glorious. They have so much control they'll never have to worry again about getting a good contract, and they avoided having their already outrageous contract deals overturned in bankruptcy court. The deals which choked the life out of GM and Chrysler are still largely intact after the bailout and now they're sitting on the board of two out of the three big auto manufacturers in America. 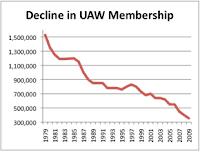 And unions need it. According to a recent article at Reuters, the UAW is in serious trouble:

Two years after the wrenching restructuring of the U.S. auto industry and the bankruptcies that remade General Motors and Chrysler, the UAW is facing its own financial reckoning. America's richest union has been living beyond its means and running down its savings, an analysis of its financial records shows.

In essence, the UAW is spending significantly more than its taking in. Not only is the auto union typically extravagant in its spending with new golf courses, seven figure incomes for bosses, and so on, but they've spent decades building a political alliance with the Democratic Party and enthusiastically use their money to support leftist causes and Democrat candidates that have absolutely nothing to do with unions or automaking.

The salad days that unions got used to are long over with now, and its a matter of maintaining the lifestyle and salaries that the leadership are used to vs surviving as an institution. So they're scrambling to get more membership in an era when most people can't imagine any good reason to send a chunk of their paycheck to a union to begin with, and working out deals like the auto bailouts to give them a few more years survival. This is why unions want to eliminate the secret ballot they fought so hard for in the 20th century

In the end, the workers tend to suffer, because when cars get more expensive and union contracts choke the life out of a company jobs are lost and the cost of living goes up overall. The UAW claims it created the American middle class (a historical absurdity). In the end, they might be one of the institutions that ends up eliminating it.
Posted by Christopher R Taylor at 8:39 AM