Its been almost 40 years, but we went to the moon. Four decades of increased technology and scientific advancement, and we've never been back. Here's the site of the last time we were there: 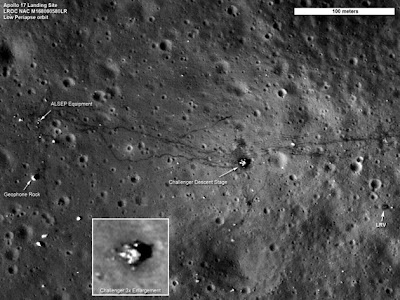 Apollo 17 went that far, left some stuff behind, grabbed some rocks, and left. We have not been back since 1972, but NASA is busy putting up satellites to see if they can prove the world is doomed by the SUV.

Its not even that far away, in terms of space. And now we're so far in debt we can't afford to even think about it.
Posted by Christopher R Taylor at 10:47 AM