"They think everybody, and I mean everybody, is either evil on a demonic scale, or a mindless sheep." 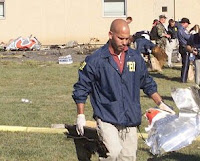 This is a few years old but bears repeating on his 10th anniversary of the craven terrorist strike on the US. The film Loose Change isn't getting as much attention these days and "truthers" are more or less relegated to the crazies in our society like furries and people who think the moon landings were faked. But there are still some out there who buy this idiotic crap, and its worth pointing out how utterly transparent it is.

This web video tries to prove:
Cracked runs down the video and shows how that's a pile of idiotic trash, but most importantly shows that the guy who made the video never intended for it to be believed. He created this as evidence of his ability to make movies, not as a documentary. It was mocked up to show how good he was at this and convince people to hire him, a sort of online film school effort. Another lunatic conspiracy nut hooked up with this guy and believed it all then piled money on him to get it spread around the world.

Jayhan, by the way, says the world is run by a massive satanic cult that enslaves prominent politicians by delivering kidnapped boys for them to molest and then blackmailing them about it later.

There's all sorts of great stuff in the article about selective editing, manipulating people, the reason someone would take a project and act like its real, and so on, but the most important one is this section on what would have had to have happened in order to pay off the people involved to go along with the great conspiracy. David Wong counts up all the people that would have to be paid off and adds it up:

Let's say they wrote 500,000 checks (hell, you've got more than 120,000 people in the American Society of Civil Engineers alone, and they'd be the first ones to speak out). Say the average payout was ten million (barely enough to live rich the rest of your life, but let's just say). So that's 500,000 times ten million which is...

That's about half of the value of all goods and services produced in the United States last year. Therefore the 9/11 conspiracy was, in terms of payroll, the single largest employer in the history of the world.

And every single last one of those people would have to stay silent about the conspiracy or even continue to regularly push it, without wavering despite the money and acclaim they'd get for revealing the sinister truth, a truth so dark and secret only some dude on the internet could figure it out. Of course, this was before President Obama, when a trillion dollars seemed like a lot of money to spend on a project.

There's another reason for going over all this again, though: when given only a small portion of information, carefully edited, and delivered in an interesting manner you can get ignorant people to believe just about anything. Josef Goebbels and Michael Moore figured that out and have had a pretty unpleasant impact on the world as a result. Be on guard and don't be one of the people taken in by this kind of reasonable-sounding but deliberate falsehood.

If you've found yourself believing this kind of thing without questioning it or showing any skepticism, stop and ponder that a moment; maybe its best you let other people do your critical thinking, because you're not very good at it.

*UPDATE: Think this is dated and not significant these days? Mark Cuban's HDNet cable TV channel ran Loose Change yesterday, on the 10th anniversary of 9/11.
Posted by Christopher R Taylor at 7:49 AM