"I do not believe that post-publication discussions of a scientific paper in the media or on blogs should be used as the basis for subsequently re-evaluating the scientific merit of that paper within the scientific peer review process."
-Professor Roger Pielke Jr 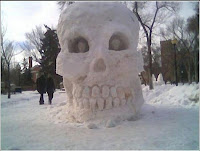 In ancient times, when a prophet or priest would make a prediction about some upcoming event or try to interpret ominous times, they would appeal to that society's highest authority and stand by its power. For those men, it was religion, superstition, and tradition. The gods have decreed that this will happen, or the stars have aligned in an inauspicious manner for this battle, or this goddess is displeased, so we have a famine, and so on.

Anyone who disagreed was attacked not just for their position, but for undermining the authority and power of the prophet and priest. They only were able to maintain their position in that society by being an unquestioned and unquestionable authority. If you brought some skepticism or doubt to their ideas and position, then their livelihood and perhaps even life were threatened. There must be absolute faith and obedience for them to maintain their special lifestyle.

Which brings us to a story in The Register. Not long ago, Remote Sensing - a scientific journal - printed a peer-reviewed paper about how there's just not the warming that climate modeling, computer programs, and various alarmist scientists predicted a few years ago. That hockey stick that showed the temperature skyrocketing failed. It didn't go up like that. This paper noted that more heat energy is being lost into space, according to satellite data, than computer modeling allowed for.

Wolfgang Wagner was the editor of this journal. I saw was because he's resigning over the publication of this paper. It was peer-reviewed, it was well-researched, it was well-written, and there's no real controversy over what it says. No scientist has demonstrated the paper to be fraudulent or nonsensical. What happened was that the alarmist community which relies on their authority being unquestioned.

Until that point, the efforts of alarmist scientists like Michael "Piltdown" Mann, Kevin Ternberth, and Phil Jones had been successful in keeping any skepticism or opposing viewpoints out of any scientific journals. It was a useful propaganda effort that worked like this:
With this publication, a peer-reviewed paper pointing out the flaws in their calculations and conclusions made it through the system. Their authority was questioned, their livelihood is threatened. If that sweet gravy train of climate hysteria money slows, they lose their status and lifestyle.

So the pressure was on, and now the editor of Remote Sensing is resigning his position for daring to buck the system and publish something questioning alarmist orthodoxy.

Ordinarily any paper questioning what everyone knows is met with enthusiasm: is water really made up of H2O? Does gravity always work this way? Is what we know really true? That usually makes up instant publication material, provided its reasonably plausible and well researched.

Not so with global warming, that cannot be questioned or heads will roll. This isn't new. When Louis Pasteur proved that microbes caused disease, he was called a lunatic and even committed to an insane asylum. The main theory of liquids in the body called humors which had to be let out through bleeding was dominant - it had consensus, it was not to be questioned, people had reputations and long study based on this. There were many important papers written on this, it was established science. They did not give up easily.

Evolution, however, was the real foundation for this attitude. No one is allowed to seriously question evolution, not in any form, not with any technique. Anyone who does so is considered crazy, stupid, uneducated, and freakish. No serious scientific journal wants to print any sort of question of this theory and it has been like this for almost a century. That's the backdrop for the climate change debate today: they have their position laid out and no one may question it because it works for them.

And so we have an editor for a magazine being made to walk the plank for daring to question the settled orthodoxy, something abhorrent to the very concept of science.
Posted by Christopher R Taylor at 9:18 AM

This was a shameful and not just unscientific but anti-scientific episode in publishing history. I suspect that climate science will be set back for years or even decades as a respectable branch of inquiry once all this is over.

But I think you make a mistake in saying that evolution is the foundation of the problems. It is true that no reputable scientist today seriously questions whether or not biological evolution occurs. However, that is not because they are cowed into silence by a tyrannical orthodoxy, but rather because the evidence that it occurs is just so overwhelming. The controversies (and there are definitely controversies!) are about the mechanisms and scope of evolution, not about its existence.

The only ones who question the actual existence of biological evolution (or who conflate it with abiogenesis) do so from a decidedly non-objective point of view, often driven by mistaken theological considerations. Problems with evolutionary theory (and there are problems, of course) are used as excuses to dismiss the whole thing, lock stock and barrel. But the scientific community is not offered any alternative explanations that would explain the data; the closest things to date has been an appeal to some nebulous Intelligent Designer that isn't God, honest, wink wink...

Sadly, evolutionary theory has for years been subjected to the kind of political abuse that now burdens climate science. Observations of what *is* are interpreted by some as what *ought to be*, to the detriment of not just science itself but also to all the rest of us who don't profit from such perversions. This has led to people using evolution to justify horrors such as eugenics, Nazism, etc. etc. etc. In a similar way climate science has been used to justify massive transfers of wealth and concentration of political power to self-described elites.

However, that is not because they are cowed into silence by a tyrannical orthodoxy, but rather because the evidence that it occurs is just so overwhelming.

That's the same line used by climate alarmists. Talk to some scientist who suggests an alternative or questions the theory and see what they've gone through.

There aren't many areas of science where diverging from the orthodoxy is met with anger, shunning, and contempt, but evolution is one of them. It has almost exactly the same hallmarks of climate alarmism, but its been so established and so little questioned that its assumed by nearly everyone now.

"However, that is not because they are cowed into silence by a tyrannical orthodoxy, but rather because the evidence that it occurs is just so overwhelming."

Nonsense. Any scientist who questions evolution is going to be blackballed by the scientific establishment, no matter how impeccable his credentials or how high the quality of his work. There are many documented examples of this.

And the actual evidence for Darwinian evolution is surprisingly weak when one takes an objective look at it, which you have obviously not done.

"The only ones who question the actual existence of biological evolution (or who conflate it with abiogenesis) do so from a decidedly non-objective point of view, often driven by mistaken theological considerations."

Not everyone who questions evolution does so from religious motivations (Richard Milton comes to mind), and that someone is driven by religious motives doesn't mean his arguments don't deserve serious consideration.

Richard Dawkins and his ilk are also pushing a metaphysical/theological position (atheism), so why aren't you scrutinizing their motives? Perhaps because you share their motives?

You also neglect to mention those who believe in evolution, but believe that it is a divinely-guided process, rather than one whose outcome is determined by random mutations and natural selection as the neo-Darwinists do.

"Problems with evolutionary theory (and there are problems, of course) are used as excuses to dismiss the whole thing, lock stock and barrel."

Isn't that precisely what promoters of the evolution hypothesis do when they claim that all evolution skeptics are religious nuts who believe the world was created in 7 days? It's the pot calling the kettle black.

I've read a good sampling of the literature put out by the intelligent design folks and can state for a fact that exceedingly few of them are religious fundamentalists who wish to promote the literal interpretation of ancient religious texts. Some of them even believe in evolution, to an extent.

"But the scientific community is not offered any alternative explanations that would explain the data; the closest things to date has been an appeal to some nebulous Intelligent Designer that isn't God, honest, wink wink..."

Why should that explanation be disregarded? Even Dawkins has admitted the possibility of intelligent design, having stated on at least two occasions that life may have been seeded here by extraterrestrials.

Neo-Darwininists have yet to offer a truly plausible, testable explanation of how life on this planet originated, and until they do, intelligent design will continue to be an explanation as worthy of exploration as any other.