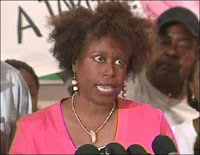 Black Democrat congressmen have been going nuts about the Tea Party Movement lately. They must have some internal polling that indicates blacks are starting to view it favorably, or perhaps looking at sitting out the next election, because the smears and lies have begun to fly around pretty thick lately.

One that really stands out, though, is in Illinois. An investigator for the Illinois human rights agency named Alvin Forbes sr sent out an email saying

“these people hate blacks. They hate Latinos. They hate Muslims and have at times made many anti-Semitic statements. They hate gays. They hate any moderate Republican who might be likely to cooperate with Obama.”

Now, a few things occur to me upon reading this news. First, if this guy is a human rights investigator, and he really believes this to be true, then he would be investigating the Tea Party Movement. According to the left, all of these opinion positions are violations of human rights. The truth is all of that is an utter, bald faced, and likely deliberate lie; nothing of the sort is true. He offers no evidence nor can he, but he sent that email out anyway.

Second, this was sent from a state government computer. On state government time, by a state government employee. He claims it was "inadvertant" which is just transparently ridiculous. What does he want people to believe, he got an email in his personal account, then tripped and copied it over to his government account and accidentally mass emailed it to co workers? Just an accident, he bumped his mouse. Forbes called the case against him "petty" which I wouldn't be surprised to find better characterizes some of his investigative work, given his antics here.

And finally, he sent these emails out a day before the 2010 November elections. Accidentally timed exactly to influence voting. Not that anyone working in his office or the Illinois government was likely to vote for any Republican candidate, but still, electioneering by a government official is at best frowned upon and probably an ethics violation.

Oh, one thing this joker did get right is to claim that Glenn Beck, Sarah Palin, and the Tea Party are trying to “take down President Obama.” Yep we sure are. Of course, he characterized Palin and Beck as "leaders" of the Tea Party Movement, which is absurd. They're members, we have no leadership. And he claimed they were all trying to take down the government like some villainous cabal who want to overthrow the US, which is ridiculous. But hey, credit where credit is due, he sort of got something right.

Forbes was given a wrist slap, a reprimand for using government equipment for slanderous lies against a good 20% or more of the American public in an attempt to influence the election. But then, this is Chicago.

The thing is, the more panicked and hateful these guys get toward the Tea Party Movement, the more you can tell they're nervous about it. If the movement was a worthless joke and waste of time, they would just ignore it.
Posted by Christopher R Taylor at 9:35 AM