“every bit as pro-Israel as the country’s own prime minister — and, if you look from the proper angle, maybe even more so.”
The generally agreed-upon narrative about Republicans winning the seat vacated by disgraced congressman Anthony Wiener is that the largely Jewish population was displeased with the Obama administration's Israel policy.

I'm skeptical of this analysis given how indifferent most American left-leaning Jews are toward the nation of Israel and often hostile they are toward its policies, but everyone is sure that's what turned the tide. I suppose that's easier to swallow than "Jews are at least as upset at President Obama's policies and actions in office."

Still you can tell how seriously the left is taking this narrative by a recent magazine cover, courtesy Gateway Pundit: 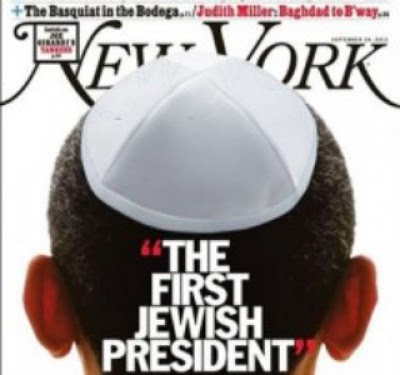 Every once in a while they get really, really blatant about the bias.

Trying to spin President Obama as being more pro-Israeli than the country's own Prime Minister - or any president before him - is simply ridiculous. I don't think President Obama is particularly anti-Israel, I just think he's stupidly pro-palestinian and largely clueless about the area. He could benefit from a recent Strategy Page article on the topic.