IS THE GOVERNMENT REALLY GROWING?

"Fed. jobs diminishing? Well a good austerity budget cutting 20% of the Federal workforce will not matter then will it?"
There's a bit of a misconception when conservatives talk about "big government" and complain about the size of the federal government. Actually there are several, but we'll get to the others in a moment.

The main confusion is that people are thinking of big in terms of the physical size of the government, as in how much property and buildings and how many people are involved in the federal government.

Business Insider recently ran a chart showing the relative number of government workers compared to the general population. It looks like this: 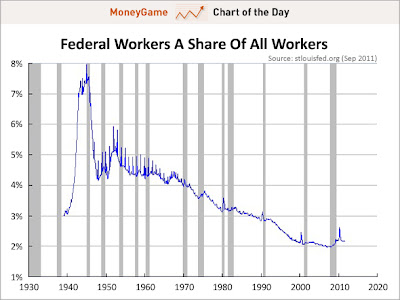 Now, from a conservative's perspective you'd think of that as a positive: its getting smaller! Joe Weisenthal writes:

Another myth debunked: Contrary to your belief that the Federal government is growing and growing in terms of its role in the government, it turns out that in one crucial respect, it's actually shrinking.

There are a couple problems with this. First, conservatives are concerned about the scope and reach of government, not its vast physical structure. If the federal government is restrained to its constitutional limits, we don't really care how big it is in terms of employees and physical structure. We care about liberty and restraint of government power. If it takes a billion people to properly carry out the tasks of government as outlined in the US Constitution and the ideals of the founding fathers, then so be it; it may some in some distant future.

But the other problem is that the chart actually supports our concerns about President Obama's hiring push.
Since FDR, the general trend of hiring has been downward, with fewer people working at government relative to the rest of the working population. The private sector has grown and grown as more businesses and companies hire and the population expands.

Further, as we downscale the military from wartime periods - yes a soldier is actually a federal employee - those people shift from government to private jobs.

And finally, as computers and other efficiency technology has grown (telephones, for instance), the various jobs can be done by fewer and fewer people.

However, you'll see that the spending dropped until the Korean War, then dropped steadily, even during the Vietnam War. Why didn't it spike then like before? Well by that point, thanks to Eisenhower, the United States had decided to stay built up in the military instead of hiring lots of people out of the private sector to work to built it up in a hurry when we needed it. From that point on, wars didn't precipitate a huge increase in government employees.

However, as you can see, there were still spikes. Johnson's expansion of welfare caused a spike. Nixon's administration caused a continuous growth as he added agency after agency to the federal government. Carter's flailing around to fix things with the government caused a significant growth. The end of the Cold War caused a growth (as did a few of Bush the elder's ideas) because it took more administration, grunt work, and clerical work to dial down the state of war we'd been in with the Soviet Bloc.

And there's President Bush the younger whose Orwellian-sounding Department of Homeland Security caused a rise in employment, but overall it tapered off in his administration. There's something else at work, but we'll I'll explain that in the context of the next president.

Then there's President Obama. Previous spikes had been fairly small but President Obama's is a bit more. Notice that really big, tight spike near the end? That's the census. Every 10 years, the US Constitution compels the president to undertake a census counting the public, and you can see like clockwork over the last few decades the census hiring tic.

It takes a lot of people to do the census, and as a result the federal government has to grow in personnel to go door to door, collect and sort the documents, analyze them, and so on. That only lasts about six months, though. The census actually reduced unemployment data under the Obama administration by a whole .3%, that's three tenths of a percent. That tells you how bad the employment situation is - that big a sudden spike in government hiring only caused that small a shift.

However, Joe Weisenthal is portraying the concern about federal hiring as a myth; see, that's not so much! Except it is for two reasons. First, the 12% increase in the number of federal employees under President Obama during a time when private sector hiring went into the negative is a fairly large increase.

Just looking at that section of the chart helps change your perspective. Yes, compared to FDR's gargantuan takeover of the economy, its not as big, but look more closely. The spike here not only grows far past the last census spike, but it also represents an overall upward trend under President Obama.

Now look at the downward trends. Under Reagan, Clinton, and Bush the younger, we saw a consistent downward track except for census and wartime bumps. The slight increase under President Bush is barely visible. Why?

Because during these time periods, the economy was growing. Early in the Bush the younger administration the economy was rough, which explains another reason for the slight increase; when private sector jobs go down, the federal government doesn't even have to grow to look bigger by comparison. Its like two cups of water, one with a leak. Compared to the leaky one, the sealed cup seems to be filling up. What's actually happening is that the leaky one is going down.

Because the cold war was over and stupidly optimistic people thought we just wouldn't need all that military and intelligence, both got cut pretty heavily. This wasn't some imperial command by President Clinton, a lot of Republicans who ought to have known better were involved. So the federal government contracted to some degree under President Clinton as well as a growth in the economy.

And even the ones that do get bigger don't have to grow very much. Even growing proportional to the size of the population does not mean much increase. If you need one IRS worker per 100 people, you can add 1000 people and only 10 IRS employees. That means as the population goes up, the number of federal jobs relative to the private sector jobs goes down.

In 1940, the population of the United States is estimated to have been 132,122,446 by the US Census service. Today its 311,800,000. That means the population has almost tripled in the time period shown on this chart. Unless something incredibly odd happened to the federal government (say, vast jobs programs, building gargantuan unconstitutional federal agencies, and a huge gearing up for war that involves much of the male adult population), its inevitable that overall the trend should be downward.

That doesn't mean the federal government is shrinking; in fact its grown astronomically in the last few decades. It means that its smaller relative to other jobs because so many other jobs are being created. For example, in 1940, at the height of the FDR spending explosion, the non-military federal government employed 910,800 people. By now its over 3,000,000 people, an increase of more than triple the number. In other words, the federal government is growing faster than the general population. If it wasn't, that chart above would look steeper in its decline.

And its more than just people. This is where conservatives are most concerned; as I noted above the number of employees isn't the real concern. Take a look at this chart:

The percentage of money the government spends compared to the average citizen's disposable income has more than doubled. That spending is not on limited, specific, enumerated powers, but on an ever-expanding cloud of government power over your life, incrementally reducing your liberty. You're less free to do things than during the war years of 1940.

And President Obama keeps expanding it more and more, as does congress. And that's what conservatives are upset about. So while this chart is very informative, it simply doesn't say what Joe Weisenthal claims it does.
Posted by Christopher R Taylor at 8:03 AM

What isn't answered here is where in the Federal government the increase is happening.