"Yeah, take it outside, God-boy"
-Superintendant Chalmers, The Simpsons 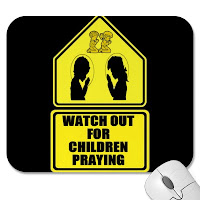 Recently I read a Facebook post by someone who was hysterical that someone openly religious might gain the presidency. He posted a screed about how witches were burned by the hundreds the last time we had anyone running the nation based on their religious beliefs.

Putting aside how false that is historically on many levels (the number of witches killed at Salem numbered at most 33, for example), the truth is these days the pendulum has swung the other direction. Government is far more likely to influence and attack religion than the other way around today. Where once the church controlled government, today the template is much more likely to be the government controlling the church.

More extreme examples would be the Soviet Union and Nazi Germany in the 20th century, where the state dictated what the church was allowed to do, say, teach, and believe. Yet we do not have to look that far back to see this happening in the USA. Josh DeVine at WSMV in Nashville reports:

Some football coaches are in trouble for something they did with their players. They said a prayer.

That has the school district taking action.
...
During a student-originated, student-led prayer, four coaches bowed their heads. They didn't say a word.

But the principal and the district found out.

So the school district issued a policy: coaches can be present when students pray but are not allowed to appear to take part. The coaches were not disciplined, but told about the policy and warned about next time.

Were the coaches praying? Not audibly. And if they were, what business is it of the school district in any case?

The principle of Church and State in the United States is laid out elegantly in the US Constitution, 1st amendment:

Congress shall make no law respecting an establishment of religion, or prohibiting the free exercise thereof;

Courts have decided that this extends to any part of government, such that no one can make laws to establish religion or prohibit its free exercise.

Unless you're a coach in the Westmoreland, Tennessee school district. In which case, the school wants to prohibit the free exercise of religion by coaches. This is going beyond a concern with religion being promoted or established by a government body - in this case, a public school - but instead has moved into the area of freedom of conscience and free exercise of religion.

In the name of keeping religion from dictating to the state, the state is dictating to religion and both are prohibited in the US Constitution. The Founding Fathers were insistent that no one could abridge the right to one's conscience, that the freedom of someone's beliefs and conscience were utterly and inviolably sacred.

If you want to pray along with others, that's absolutely protected by the US constitution, even if you're a teacher, or a Senator, or any other government employee, bar none. This is the government insisting that the dominant faith of our day - secularism - command the conscience and behavior of people in the guise of avoiding establishment of religion. And it happens almost weekly across the country. No crosses on public land. No mention of God in any public meeting. No prayers at school assemblies or mention of Jesus in graduation ceremonies, on and on.

This isn't separation of church and state, it is establishment of state upon religion. The absurd, hysterical cries of "dominionism" and fears of some president who actually does believe what they profess about God are masking something else: a need for one's own faith-system to dominate.
Posted by Christopher R Taylor at 10:34 AM

And China in both the 20th and 21st centuries.

I remember we invited our high school football coach to lead the team in a prayer once, right before we played in the first round of State Championship playoffs. I will always remember his response, and this is pretty damn close to word-for-word... it left a huge impression on me, probably moreso than the church services I've attended: "Boys, I'll lead you on that field before the game and I'll lead you back off it after the game. I'll tell you what plays to run and I'll tell you if you're running 'em right or running 'em wrong. But what I won't do is presume to be able to square you with God over a football game, because I have no idea how a man does that. You want a prayer from me, well here it is: 'Please God don't let any of these boys get hurt tonight.' Now let's go knock these guy's dicks in the dirt."

The movie The Replacements had a hilarious sequence with Loggia making a fierce, violent speech about doing horrendous physical harm to the opposing team, then ending with a prayer. The juxtaposition wasn't irreverant, it was making fun of the practice.

It always bothered me when I played football that we prayed for God to "deliver us to victory". I understand praying for the strength to play our best game, or praying for nobody to get hurt, or praying to help us keep level heads and good sportsmanship in the midst of the violence we were about to engage in. But asking God to chose a side over a high school football game always seemed like a little much... now, college ball I can understand. ;-)