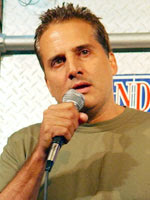 I like comedy, good comedy. It helps get my mind of dark and sad things and often comedy can carry truth in a more memorable and powerful way than any other medium. I prefer clean comics, because it takes a lot more talent to make people laugh without dropping F-Bombs all over, but the truth is some really foul mouthed comics are quite funny.

Nick DiPaolo isn't especially foul but he's not particularly clean, either. He's also not very politically correct. In fact, he's pretty much a libertarian, if not a conservative, and he's not shy about it. As a comedian he's never seen the success of some like Rosie O'Donnell who are hard core leftists and gleeful to let everyone know. Being right-leaning is damaging to your career. But that doesn't stop DiPaolo and he's not about to apologize, either.

And that's something about comedy which people don't seem to understand. Recently DiPaolo was interviewed in the Detroit Metro Times by Corey Hall and the topic of Tracy Morgan came up:

DiPaolo: Honest to god. Here's the difference: I say that on an NBC show? I'm gone. There's no discussion. The story doesn't go away in two weeks; I'd be on the cover of Time. The media still leans that way. A black guy, homophobic? Nobody is more homophobic than black and Hispanic guys, nobody. But you're not going to hear that in the mainstream media, you're not going to see it in a sitcom or a movie.


MT: Eddie Murphy sort of built his career on stuff like that.


MT: Isn't that kind of the comedian's role — to push the edges and poke around the sore spots?

DiPaolo: Yes, but it's getting a little weird out there. You know, Canada has speech codes. ...


MT: There was a big lawsuit, right?

Now, I wouldn't say that a comedian's role is to "push the edges and poke around the sore spots" because their role is to make people laugh. Period. But part of making people laugh is pushing the edges because comedians have to be allowed to touch areas others stay away from in order to do their job. If a comedian has areas they cannot talk about, then their ability to make comedy suffers. Much of good comedy comes from poking at hard, painful, scary, and dangerous areas, and turning it into humor.
And that means topics that aren't politically correct, like two lesbians hecklers, or gays, or blacks, or what have you. There's plenty of rich, welcome topics out there which could be exploited by comedians but is not because they're effectively banned from it by politics, pressure, and leftists who'll destroy them in reviews and media for daring to mock something. Its not just President Obama, its all sorts of topics.

Both DiPaolo and Hall briefly mentioned Lenny Bruce who was mildly funny, but is known for breaking several barriers in comedy such as talking openly about sex and using profanity in his act. Bruce is considered a genius and a groundbreaking comedian, one of the most important ones in the last fifty years because of his willingness to do this and how it opened up comedy for future generations. There couldn't have been a Richard Pryor without Lenny Bruce, for example.

Yet today comedians are even more restricted by the PC mores of society and the comedy business because they cannot talk about some areas and must take certain positions to get any work. Before anyone could make fun of Kerry or anti-war protesters a few years ago, they had to spend ten minutes mocking President Bush. They had to establish their "oh yeah I hate him too" credentials. Before anyone can make fun of anything leftist, they have to take a long time to make sure everyone understands they're on the same side.

But the most telling thing about DiPaolo and comedy is that he understands something that most comedians today don't seem to:

I don't get that political. Comedy clubs aren't really the place for that. You're playing to drunken 22-year-olds who don't exactly read the paper every day.
...
I've been saying this for years: You'll find a better comedy audience at a strip club. At least the people there can afford to buy a dancer a $15 club soda. They actually wear suit jackets and work real jobs, and read the paper. There are actually adults in there. Comedy clubs, let's be honest, if you look at audience these days, it's, like, 10 girls at one table trying to cheer up their one miserable friend. "Ooh ... Diane had a miscarriage, let's take her to the Funnybone."

People don't listen to comedians to hear political analysis. We want to hear them make us laugh, not piss us off or bash political opponents. See the dark place he went there about Diane's miscarriage? That's where comedy has to be able to go: he's making a humorous point out of a painful, awful event. And its true. People go to these things to cheer themselves up and forget, to have a good time. Not to learn about world politics, not to listen to someone attack a politician or a public figure for having the wrong political viewpoint, but to laugh.

Would that there were more comedians with that kind of courage and viewpoint. Because foul language, bashing Bush/Palin/insert latest leftist target, and talking about how awful white people are is cheap and easy for laughs. Stand up and do your job, you hacks.
Posted by Christopher R Taylor at 8:54 AM

I wish they would bring tough crowd back, the most common guests on the show were DiPolo, Patrice O'Neall, Jim Norton. all of them are irreverent and not afraid to tell it like they saw it. It would do well now I bet, just not on CC.