Say brother, you wouldn't happen to have a dime about you, would you?
Al Jolson, "Brother Can You Spare a Dime?" 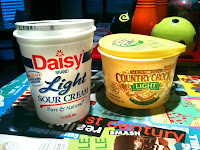 Something I've marveled at with my mom and her sisters is that they'll keep and reuse about everything they can. Long before recycling and reusing became the mantra of the environmentalist, depression-era people were doing it. This wasn't out of some need to save Gaia or feel good about themselves, it came from a childhood habit of keeping what you could because no one could afford to buy replacements.

Aluminum foil, for instance. I tend to wad it into a ball and toss it in the trash, but they keep it and wash it for reuse. Which makes sense, if you think about it. Aluminum foil, unless torn, is a continuous sheet of metal, which you can flatten out and wash like any other metal object like a fork. Washing it off and storing it means you can unroll that stored bit and use it again on something else.

Or take those plastic containers that butter, sour cream, and other goods come in. My mom calls them "icebox dishes" because that's what she uses them for. She has some that had honey in them from back in the 70s, carefully washed and stored away. Any leftovers can go in them, and they save money in buying those freezer boxes at the store. I use them for the same thing, its just how we were raised. A stack of those and a drawer full of lids and you're set; they even make a good bowl in a pinch.

In the same way, you can reuse most jars you get things in. Glass is preferable for this, as plastic absorbs things more readily and is less durable, but plastic can work as well. Just wash up that Salsa jar or that mayo jar and use it to store things like cereal or rice. You'll want a goodly sized container for this kind of thing, but even small ones can be useful.

These days its easier to reuse some containers because of bulk food sections in many stores. These started up in the 70s as a cheap alternative to packaged foods (generic brands came out about this time too, but faded away by the late 80s). Most stores have a spice section in the bulk foods aisle, and that stuff is often a tenth the price of a jar of spices or more, by weight. Reusing an old spice container for the same stuff works great, and saves quite a bit of money.

Reversing old patterns of disposable items is an important lesson from that era as well. To people from the depression, using paper towels when an ordinary towel will work is foolish and wasteful. You can wash and reuse a cloth, but paper towels are one or two-shot items. Disposable sponges can be useful, but a washcloth will last you years with washing.

And those old sheets or bath towels that start to wear out? Clip them down to regular shapes and store them for rags and hand towels. The concept here is to save money by using what you have, rather than saving time and effort by spending more money. Reversing that pattern can generate a surprising amount of money in the long run.

Which brings us to diapers. There's a time and a place for disposable diapers; when you're on a long trip or have to attend some event you can't readily rush out of with the baby. Depending on the estimate you find online it can save from a few hundred to a few thousand dollars a year to use cloth diapers. Yeah its nasty to wash them (mom would rinse them out in the toilet and keep them in plastic until washing) and yeah they require you to attend the child more often and quickly than a plastic diaper. They require a specific set of skills to apply other than "open the package and tape them on," but the point here is saving money.

Ultimately there are a lot of ways to save money by using old skills now all but forgotten, and I plan on writing about more of them as time goes on. They require more trouble, but save money.

And when it comes down to it, almost all the cost savings tips and habits of depression-era people are more trouble and effort. Washing up cloth napkins and towels instead of throwing paper ones away not only requires the washing, but doing it regularly enough that you don't run out, for instance. Its going to take more personal effort and discipline to keep up a depression era lifestyle.

Yet that's part of its benefit as well; the more disciplined we are and the less time we spend on ourselves and entertainment, the better off we and our society would be as a whole. Obviously there's a limit here, everyone needs relaxation time or they eventually collapse or crack under the stress, but we're a long, long ways from that point as a culture.

And the fact is, many of the things depression era people did was better for the environment. Because they threw away less, they created less trash and landfill. Because they used less plastic, the trash they did generate was more biodegradable. Because they would use fewer disposables, they were less likely to toss things out when they traveled, littering the countryside. All of which means the world is better off, not out of some faux guilt about saving the planet or foolish scenario of climate doom, but just plain old fashioned personal responsibility and frugality - both virtues.
Posted by Christopher R Taylor at 8:12 AM