"We’re supportive of the president, but we getting tired, y’all"
-Representative Maxine Waters (D-CA) 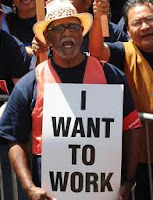 Every so often you catch a pundit being honest. Its not often, because talking heads and politicians are paid to say things political rather than things true, and their jobs depend on saying what people want to hear rather than what is real.

And certainly with President Bush. So why isn't this march taking place? Well its not because they figured out these marches accomplish nothing:

There is a less-volatile reaction in the CBC because nobody wants to do anything that would empower the people who hate the president.

This is a bit less honest, however. This statement is true as far as it goes, but there's much more to it that he's not saying. Unemployment, poverty numbers, and so on for blacks have been really bad for a long time now. It is only recently, when the press started bringing attention to these numbers that the CBC is starting to react.

If this really was a serious concern, where were they a year ago, two years ago? Is almost 3 years the point at which you say "hey maybe this isn't working?" They all fought hard to get the "stimulus" package passed, which promised to keep unemployment under 8%, and it rose to 10% soon after the spending started. Blacks have suffered far more from this economic downturn than any other group (except young people, and they don't vote much). Where was the concern earlier?

Their first reaction was to attack the Tea Party Movement, with bitter, lying racial slurs and slander. They claimed the Tea Party people want to lynch blacks and so on. Cleaver tried to brush that aside claiming “Maxine Waters represents central Los Angeles first and she has to represent her constituents first and she's going to say things in order to represent them.” The translation is "this is what her constituents want to hear so she's pandering to them."

But now, with President Obama's poll numbers plummeting and everyone realizing what an unready, incompetent, empty shirt radical he is, the CBC has joined the rest of congress in trying to distance themselves from the president.

President Obama did everything they asked and wanted, and now people don't like what happened, so they have two choices: recognize their ideas are unpopular and unwanted, or blame a figurehead for how its turned out. Yeah, you guessed what they've chosen.
he truth is, this isn't really about finding solutions, its about avoiding blame and looking busy. The CBC is in power only because of racial grievances - there's no Asian Caucus, there's no White Caucus. There's only a Black Caucus because blacks are given special dispensation by the press and the left to form race-focused groups.

The biggest reason for the delay is related to this: President Obama is perceived as being a black man. Sure he's just as white, but that's not important to the CBC; they think of him as black. And they won't do something that causes problems or attacks a leftist black. Sure, they'll attack Tea Party black members (some leftists will even do so physically), they'll savage blacks in the Bush administration, but not a leftist.

So here we have the real reason for the delay. Its not about fear of empowering enemies of the president so much as protecting a black president. And that's what the press has been so cautious about, and why they so wildly and stupidly threw themselves into blatantly campaigning for Barack Obama: fear of being considered racist.

For black congressmen - and many black voters - the fact that a black man is president is reason enough to support him. If he was a Republican maybe they'd have some doubts, but since he's a Democrat, well even if he sucks he's one of us. Look around the country at mayors in big cities and how many of them are just terrible but keep being elected. Detroit has had a series of awful, corrupt black mayors. Marion Barry got reelected while under investigation for corruption and smoking crack and even after being convicted was reelected. Because he's black, and left leaning.

And that's what it all boils down to here. The CBC told part of the story but the full one is this: we won't touch him because he's one of us, no matter what happens, no matter how bad it gets for our supposed constituents, no matter how things go. Jesse Jackson called for a march on Washington in his idiotic tirade trying to tie the Tea Party movement with slavery, but he didn't say anything about leading such a movement; he won't come near that idea.

And in the end, you have to wonder what the point of the CBC is. Is it really to the benefit of Joe Jackson in Watts to protect a president just because his skin is dusky? How does that help Martha Smith in Detroit get a job? What does that do for blacks anywhere, other than give them some misguided sense of pride? Because having an incompetent, stumbling, and failing guy as president doesn't make blacks look good. He's got to be someone who does the job well or all he does is make idiot bigots think this confirms everything they thought about blacks.

In the end, the CBC continues to fail their constituents, show how worthless their caucus is, and demonstrate how its about power and politics instead of serving the people. And really, if the press hadn't brought up how bad its gotten for blacks, would Emmanuel Cleaver or Maxine Waters have even noticed?
Posted by Christopher R Taylor at 7:55 AM