"he was a lone wolf in the operation -- they wouldn’t give him any help for 24-hour surveillance.” 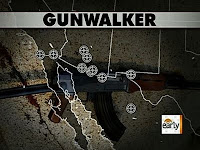 Briefly, Operation Gunwalker is an expansion of an existing Bush-era ATF program which attempted to track guns that ended up in the hands of narco gangs in Mexico. The Obama administration stepped this up to actually putting guns in the hands of these criminals, resulting in literally hundreds - as in more than 200 - deaths, including US police officers, citizens, and federal agents.

So far this isn't getting much attention in the news, but its a far more horrific scandal than Watergate, Iran Contra, and Solyndra combined. The Obama administration has been stonewalling investigators and trying to portray this as an isolated state attorney general's actions.

However, finally, Fox News did cover the story with a pretty devastating lead in:

Not only did U.S. officials approve, allow and assist in the sale of more than 2,000 guns to the Sinaloa cartel -- the federal government used taxpayer money to buy semi-automatic weapons, sold them to criminals and then watched as the guns disappeared.

Will this gain any traction? Not if the legacy media can help it. Federal agents were literally ordered to not follow the guns up. Why on earth do this?

Well, a few years ago President Obama stood up and made a speech. Gateway Pundit reminded us all of this speech, with the full video and this excerpt:

“This war is being waged with guns purchased not here but in the United States… more than 90 percent of the guns recovered in Mexico come from the United States, many from gun shops that lay in our shared border. So we have responsibilities as well.”

Now, usually the Democrat line is 80% but President Obama took it a bit further for effect. Where does that number come from? A statement by the Mexican government, without any statistical or supporting data, just an assertion:

In May 2010, for example, the Mexican government, which has received training from ATF to better identify firearms, said that of the 75,000 firearms it seized in the last three years about 80 percent, or 60,000 firearms, came from the United States.

In reality, only around 17% of the guns used in violent crime in Mexico come from the US. Until Operation Fast and Furious/Gunwalker. They shipped more than two thousand guns across the border deliberately to violent drug cartels.
Remember this little bit from President Obama not long ago? It was reported in May of this year in a profile piece in the Washington Post:

On March 30, the 30th anniversary of the assassination attempt on President Ronald Reagan, Jim Brady, who sustained a debilitating head wound in the attack, and his wife, Sarah, came to Capitol Hill to push for a ban on the controversial “large magazines.” Brady, for whom the law requiring background checks on handgun purchasers is named, then met with White House press secretary Jay Carney. During the meeting, President Obama dropped in and, according to Sarah Brady, brought up the issue of gun control, “to fill us in that it was very much on his agenda,” she said.

“I just want you to know that we are working on it,” Brady recalled the president telling them. “We have to go through a few processes, but under the radar.”

Already there were rumors of Gunwalker out, and rapidly the story exploded as frustrated ATF and Justice Department whistleblowers went to congress and the press.

Now put that all together with this recent piece by Michael Wash in the New York Post:

After months of pretending that “Fast and Furious” was a botched surveillance operation of illegal gun-running spearheaded by the ATF and the US attorney’s office in Phoenix, it turns out that the government itself was selling guns to the bad guys.

Agent John Dodson was ordered to buy four Draco pistols for cash and even got a letter from his supervisor, David Voth, authorizing a federally licensed gun dealer to sell him the guns without bothering about the necessary paperwork.

“Please accept this letter in lieu of completing an ATF Form 4473 for the purchase of four (4) CAI, Model Draco, 7.62x39 mm pistols, by Special Agent John Dodson,” read the June 1, 2010, letter. “These aforementioned pistols will be used by Special Agent Dodson in furtherance of performance of his official duties.”

On orders, Dodson then sold the guns to known criminals, who first stashed them away and then -- deliberately unhindered by the ATF or any other agency -- whisked them off to Mexico.

What possible purpose could Operation Gunwalker have had? Connect the dots, because no daring investigative reporter at the Washington Post or New York Times is going to do it for you. They're trying desperately to look the other way.
Posted by Christopher R Taylor at 9:17 AM