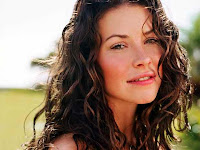 Peter Jackson took a few liberties with the Lord of the Rings movies, particularly the second, but they still made a zillion dollars and won him armloads of Oscars. So when he turned to filming The Hobbit, its not surprising that he decided to wing it even more. For example, there are going to be two movies, the first following the book and the second basically invented material from notes and small mentions of what happened before the LOTR trilogy took place.

So basically he's making up Tolkien material almost out of thin air, creating an entire new story of his own based on some information from the books. That makes Tolkien fans nervous, to put it mildly.

Then there's Tauriel. In the LOTR movies, Jackson greatly expanded the character of Arwen because there weren't many female characters and they were pretty minor. In The Hobbit, he's inventing one and jamming it into the book. She's played by Evangeline Lilly (Lost), who said about the part:

Yes, it is a children's book, like Harry Potter or the Narnia chronicles. She'll be playing an elf, presumably encountered in Mirkwood, who will be the Legolas character in the movie. This new character is rammed into Tolkien's work basically because Jackson believes he's a better writer and knows better how to tell a story than J.R.R. Tolkien who has one of the bestselling series of books of all time, considered great literature and enjoyed by generation after generation.

In other words, its typical Hollywood stuff: I know better how to do this, shut up, writer.

Hey, there's no black guys in the Hobbit either, better put one of them in. Maybe Chris Tucker he was so funny in Rush Hour? Do you understand the words coming out of my mouth, Gandalf!?? There's no blatantly gay characters either, Harvey Firestein as a dwarf. Just add one in, called "Homo." And we need a Hispanic character, too, perhaps Carlos Mencia can steal some of the other characters' lines. And a dog, why aren't there any dogs? A cute puppy that gets in all kinds of funny adventures and everyone can laugh and laugh.

I won't be seeing these movies.
Posted by Christopher R Taylor at 8:25 AM

It matters a lot more to me HOW they do it than if they do it. The Arwen love storyline in LOTR was well done, I thoought, and the end result is that my wife will watch LOTR with me if its on, whereas otherwise she probably wouldn't.

On the other hand, you have Jar Jar Binks.

So if they can add a strong female character to The Hobbit without making it a) stupid b) pointless c) political or d) distracting, I don't really have a problem with it, especially if it means my daugther will enjoy the movie more (LOTR scares the crap out of her and she won't watch it... I'm hoping Jackson sticks to the more innocent/less complex adventure based story of The Hobbit).

My first thought after reading the article was "Smaug in a wheelchair".

But that would be tasteless...