“In a country that is increasingly nonwhite, this ‘whiteness’ is now a nuisance.”
-Paul Kersey 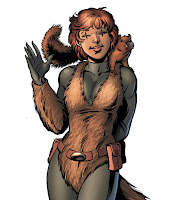 Spider-man is black. Actually, he's not; Peter Parker, geeky white kid, is still Spider-Man. There's an alternate "grittier" universe called the "Ultimate" universe that Marvel put out that's more PC and more grim than their original comic book setting. In Ultimate Spider-Man, Peter Parker was killed and a half black, half hispanic kid took his place. That's not the first time Marvel has done this. The reason Nick Fury is played by Samuel L. Jackson in the movies is that the "Ultimate" universe Nick Fury is black - and the artist based him on Sam Jackson. The original Nick Fury from WW2 era comics is a white guy.

In fact, as Kathy Shaidle points out (from a book), most of the superheroes are white. Wolverine, Captain America, Batman, Superman, Green Lantern, Wonder Woman, Invisible Girl, Squirrel Girl - all whiteys. Part of the reason for that was that the majority of Americans were (and still are) white when the characters were created, and part of it is because their creators were white and wrote what they knew. When white guys tried to write black superheroes we got guys like Black Lightning from the 70s: 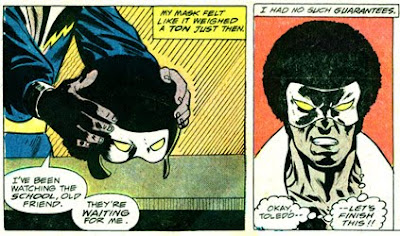 Yeah, the fro was actually part of his mask. Still, there's a greater effort to get more non-white heroes in comics, which I'm basically fine with, but the revamping characters into minorities just to get some in the storyline is uncomfortable, to me at least.

And the reasoning behind it is a bit flawed. Almost all bad guys are white, too. A very few of them are different - The Mandarin in Iron Man is Chinese (although if you notice, he's not come up much for a while in the comic). And if you watch the Spider-Man movies, he only beats up white guys. Shaidle quotes from a book by the guy that runs the website Stuff White People Like:

“Having a half-black/half-Hispanic Spider-Man is hilarious, because his origin story is quite simple: Horrible rates of black and Hispanic crime in New York City can only be dealt with by a half-black/half-Hispanic hero. A white hero would be called racist for dealing with these thugs, so having [a biracial hero] don the red and blue tights makes absolutely perfect sense.”

He's being sarcastic, but what would the charges be if Spidey swung around beating up on blacks and Puerto Ricans in New York City? He's a racist thug beating on minorities, who hugs the flag. A white boy who hits blacks, a terrible role model, etc. Put a black/hispanic in the costume and presto! Racist charges go away.

But why can't they come up with a new character instead of forcing old ones into different hues? What's wrong with coming up with a different, more interesting guy that appeals to readers? Over and over, old characters and villains have been revamped by skilled and talented writers in comics, why not take an old character few if anyone knows and make them an interesting minority character?

But then, why do we have to get rid of whiteness in comics to begin with?

Something that got a lot of traction in the 70s was black pride. Blacks, finally feeling free and able to walk down the street without fear started to talk about how they liked being black in America for the first time. James Brown put out a song about the topic, and blacks started letting their hair grow more naturally instead of trying to mash and chemical it down into looking more straight. Times have changed and now with chemicals and weaves, blacks are trying to look white again, but the principle took hold.

Now, black culture dominates much of American entertainment and media. Rock music is all but dead, and Rap dominates the charts. You can hardly find a single movie no matter what the genre or story that doesn't have at least one rap or hip hop song in the soundtrack - usually over the credits. Black is cool, its the preferred cultural pattern for young people in America. The slang, the music, the clothes, the cars, the behavior of rap videos and movies of black youths are the template for teenage America. Watch any movie and the black guy is always the coolest, the best, the smartest, and the most capable character - unless a gay character is involved, of course.

That's no better or worse than any other culture dominating, and in some ways its uniquely American - urban American, that is. But there's nothing wrong with White culture, either. And the problem is, popular culture and young people think whiteness means losers, geeks, and failures, while apparently the Obama administration and many in academia think it means brutality, oppression, and bigotry.

White pride seems like a weird concept, and the first idea people get when you bring up the topic is bigotry and white supremacists. White pride = Aryan nation to most people, and certainly nearly every leftist, who if they are white are seem deep down ashamed of it.

But there's nothing particularly wrong with being comfortable of your ethnic background, whether hispanic, black, or any other origin. White folks have their own culture too, and things that we like. We bring our part to the melting pot too, and its the bulk of the mix in America's history. White culture isn't brutal or oppressive, criminal or racist any more than any other culture. We all have our bad sorts, and they're rejected by the majority of people.

The website Stuff White People Like is mocking hipster douchebags, but there are things White People actually do like, contributions to culture that are great and laudable from white people. Bluegrass, Country, Western, and Swing music are all from white folks. Heavy metal, rock and roll, rockabilly, all from white folks (even if rock was heavily influenced by blues and early soul).

A website actually praising accomplishments and things real white folks really do like and bring to America wouldn't just be unique but in this culture a breath of fresh air. For decades now its been presumed that white culture was so dominant, so strongly pushed on people, so pervasive, and so presumed that it could be ignored and even attacked in order to "balance the scales."

Well guess what: you've shoved the other end of the scales down so hard the thing is almost vertical. Its time for white folks to stand up and say "hey good for you, here's what we like and add to the mix, too!"

After all, the dream is for people to not care what color your skin is, to realize everyone is just human and we all have something to add to America, if we bring positive and constructive things to the soup pot. So why not have white Spider-Man?
Posted by Christopher R Taylor at 8:27 AM